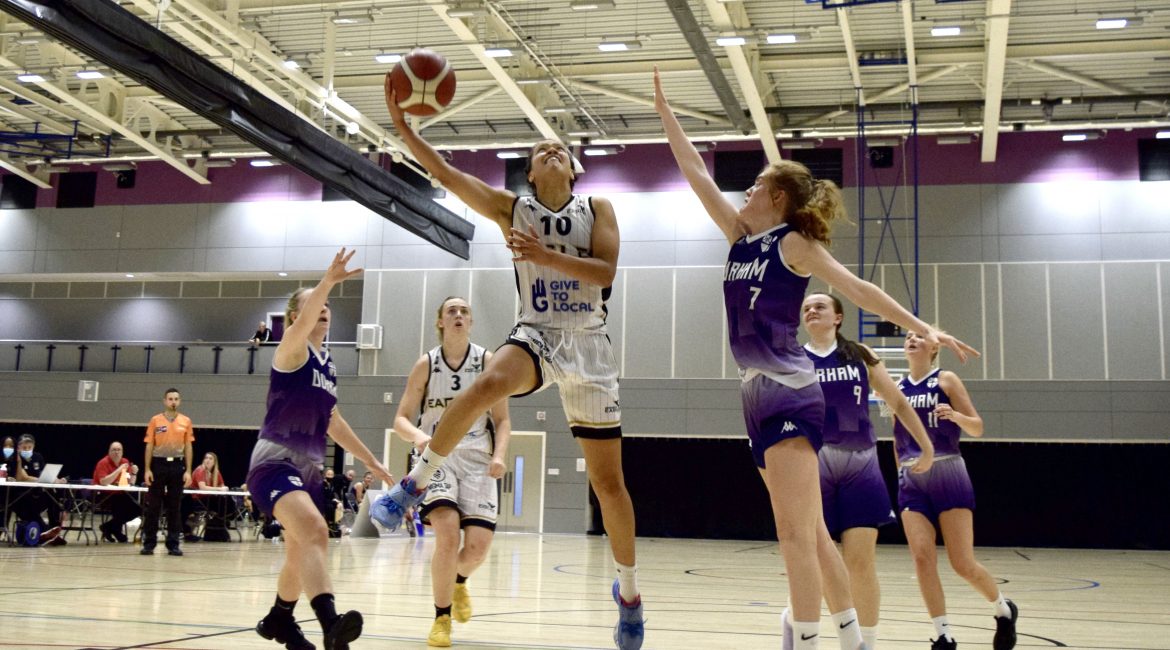 The former Manchester Mystics guard bagged 31 points, seven rebounds and four assists to emerge as the standout star of another stunning Newcastle win.

For the second time in two days total team basketball underpinned an eye-catching win for the women in black with 10 scorers pacing a packed stat sheet.

And GB Under 23 3×3 star Abby Lowe was the only player to clock more than 28 minutes as Bunten rotated one of the deepest rosters in the WBBL to perfection.

The Eagles blew the game open with a 25-0 tear either side of half-time to book their place in the last four of this season’s remodelled cup competition.

And Saturday’s league opener against Oaklands Wolves at the Vertu Motors Arena can’t come soon enough for fans starved of top-flight women’s hoops on Tyneside for the last 18 months.

Both teams headed into a behind-closed-doors derby on the back of statement victories against Group A basement club Caledonia Pride.

And the winner of yesterday’s clash was guaranteed a rich reward with a place in this season’s WBBL Cup semi-finals up for grabs.

Newcastle made one change to Saturday’s starting five as Niamh Kelshaw replaced the injured Courtney Clasen.

The latter had fallen awkwardly in the third quarter of the Eagles’ 84-50 win against the Pride 24 hours earlier.

And US guard Clasen was courtside in a wheelchair as the club nervously awaits news on a potentially serious early-season injury.

Neither the Eagles nor the homecourt Palatinates could have expected another one-sided win following respective routs against Caledonia.

And perhaps unsurprisingly there was little to separate two fully committed teams heading into the first period break.

Lightning did strike twice for the Eagles in the shape of all-action Horton as the busy guard once again dominated the early exchanges.

But the 22-year-old’s 10 points and two boards in seven sparkling first quarter minutes was not enough to stifle Durham’s early offensive threat.

An 11-0 Newcastle run did open up a 27-18 lead and Bunten’s side could have stretched that advantage had two piercing bounce passes from Abby Lowe been converted under the glass.

The Palatinates reduced the deficit to a point thanks to back-to-back free throws from bench player Izabel Wood.

But Lee Davie’s side was in serious foul trouble as former Newcastle favourite Kara Elderkin picked up her fourth of the game seconds before the break — one of three Durham players on three fouls or more with 20 minutes on the clock.

Even so, nobody could have predicted the offensive onslaught that turned a previously tight encounter on its head and sent the Eagles soaring into the WBBL Cup semis.

Bunten’s side started the third period with a barely believable blitz of 21 unanswered points to lead 56-30 and all but finish an incredible cup tie as a contest.

Horton was on fire as the GB Under 20 star surged towards 30-plus points but it was Newcastle’s threat from every angle that left a despondent Davie utterly dumbfounded.

And it appears that the winless Wolves have it all to do ahead of this weekend’s trip north with Bunten’s pre-season optimism backed up by two decisive opening weekend victories.