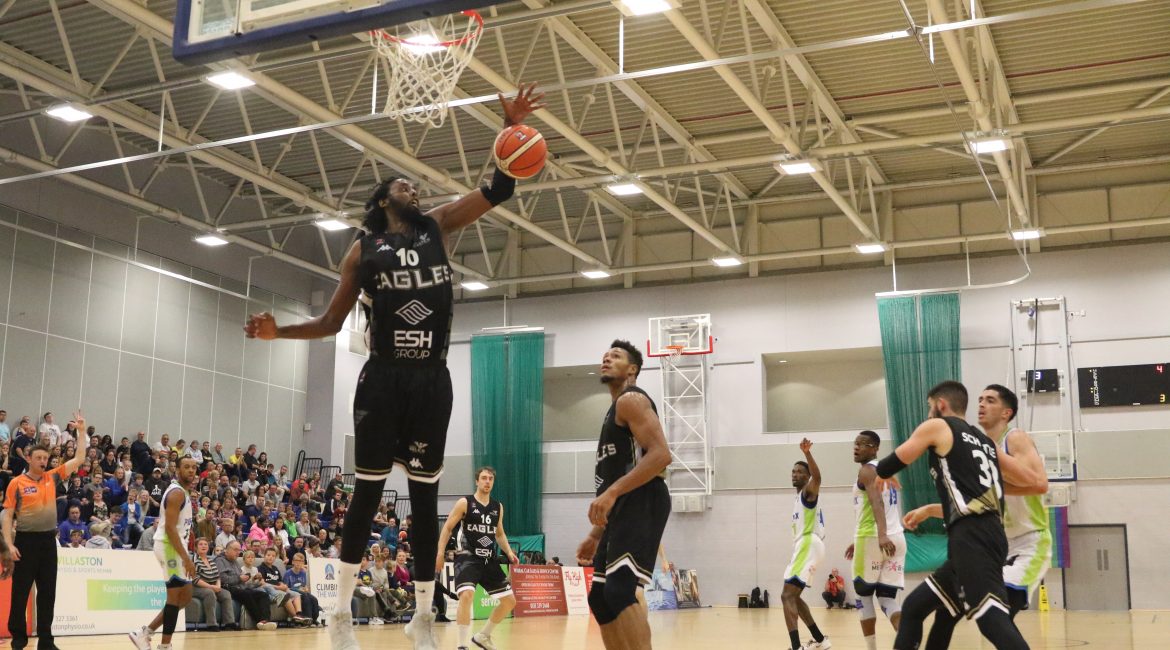 The Newcastle Eagles took their second road win in under 48 hours at Cheshire last night to move to 4 – 1 for the season and remain in pole position in the BBL Cup North Group. It was a scrappy game in which the high scoring belied the nature of the game.

For the Eagles it was Sade Aded Hussein who will grab the headlines as his magnificent double-double of 30 points and 13 rebounds led the visitors to victory. Not that his team-mates didn’t support him in what was another solid team effort.

Captain Rahmon Fletcher also had a double-double of 17 points and 10 assists whilst Nick Schlitzer and Darius Defoe netted 15 points each. John Mitchell made it five Eagles in double-figures with 10.

As had happened at Leicester on Friday, Newcastle were dominate on the rebounds grabbing 52 to the home sides 28 and once again pulling down 21 offensive boards. The Eagles powerful front court of Hussein, Mitchell and Defoe is certainly in dominating form at the moment.

With Fletcher and Glasgow pulling the strings at the guard position things are shaping up nicely for the first Eagles side post-Fab Flournoy and new interim Head Coach Ian MacLeod must be delighted with the way his players are responding to his promptings.

Once again, the Eagles were without Mike Morsell and also had to do without Kai Williams who although suited up and on the score sheet played no part in the victory. But in Schlitzer and Hussein in particular, the visitors more than compensated for the missing.

To be fair to Cheshire they also were short-handed with Captain Momcilo Latinovic missing and GB International Ben Mockford not registered in time. The Phoenix to their credit never went away and shot 14 triples in their efforts to stay with the powerful visitors.

Both sides had struggled in the early going and were missing a lot of shots and although Eagles sneaked ahead early a 9 – 2 run from the home side gave them the advantage that Newcastle couldn’t pull back in the first ten minutes as Cheshire lead 25 – 20.

Newcastle went further behind and the gap went to eleven before they finally got their form and style rolling. A 10 – 0 run got them back into the game and when Hussein tipped in on the buzzer his side went to the locker room on a 16 – 4 run and a one-point lead at 40 – 39.

Thirty-three points were poured in by Newcastle in the third quarter as they finally exerted their authority on the game and began to move away to make the win look more and more probable. Louis Sayers and Parker Jackson-Cartwright kept hitting triples to keep Cheshire in the game.

Newcastle’s lead was ten with ten minutes to play and perhaps they could have been expected to pull away as Cheshire tired. However, the final period was one where both sides cancelled each other out as the scoring race finally slowed down and Newcastle held on comfortably.

Coach MacLeod and his assistant Dave Forrester will probably look at the defensive end and in particular the three-point defending which kept Cheshire in the game. But, in the final analysis, it’s another win on the road for an Eagles side that is looking strong all-round.