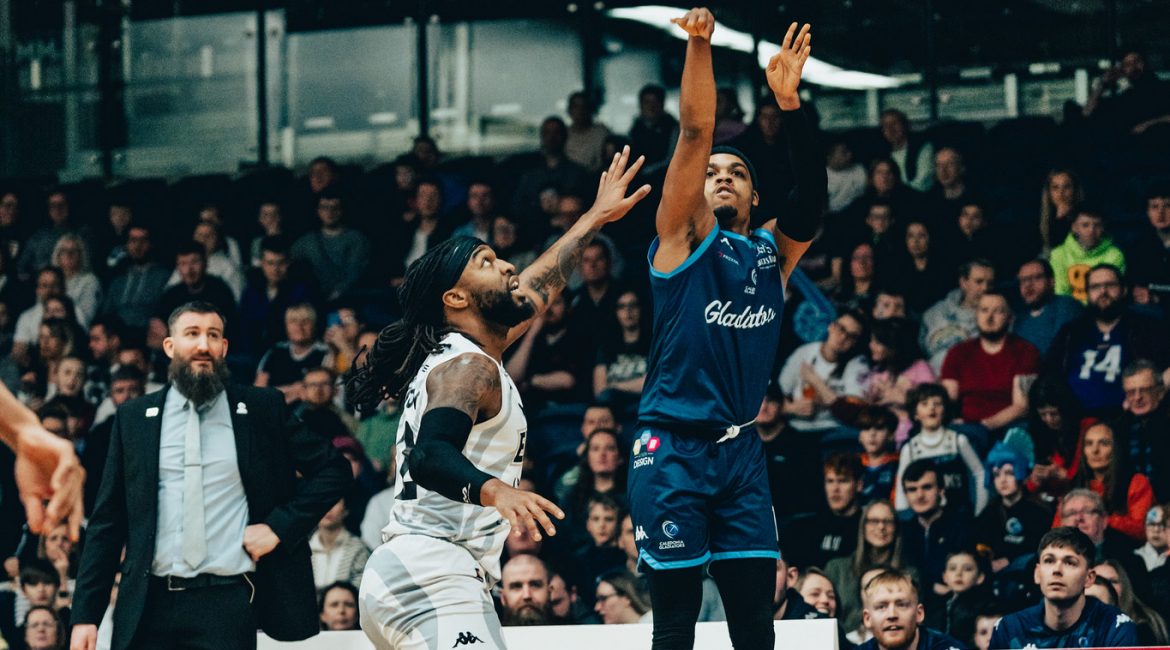 The most successful franchise in BBL Trophy history will have to wait for a record-breaking eighth title after Newcastle Eagles were dumped out of this season’s competition by cross-border rivals Caledonia Gladiators.

On a night when Marc Steutel’s men couldn’t buy a three-pointer — shooting just three from 24 from downtown — the visitors allowed in-form Jeremiah Bailey to get hot.

Watch highlights of Eagles at Gladiators:

And despite leading 55-54 early in the second half, Newcastle saw that advantage slip against a well-drilled and hungry Gladiators.

No team has enjoyed greater success in the BBL Trophy than the Tynesiders and the Eagles have found a route to no fewer than 10 finals during the last two decades.

Newcastle started the club’s storied run of silverware success by lifting the title in 2005 and added a seventh Trophy to their cabinet in 2020.

But too many missed defensive assignments and a lack of fluidity on offence cost Steutel’s men dearly as Caledonia booked a quarter-final tie against London Lions.

The hosts made all of the early running on the back of a flurry of triples and a 17-8 Gladiators lead forced Steutel into his first time out.

The Eagles — sparked by Donovan Johnson — fought back before an 18-3 tear opened up a 47-32 advantage for the Scots towards the end of the half.

And Newcastle needed a 9-0 run of their own to stay within touch of the men in blue and trim the home side’s lead to eight points.

The visitors enjoyed their best spell of the game after the restart and a Donovan Johnson three-pointer capped an eye-catching 8-0 tear.

Moments later the Eagles led for only the second time but any respite was brief as dangerman Bailey motored his way towards an MVP haul of 31 points, 12 rebounds and six assists.

The return of Newcastle favourite Justin Gordon — re-signed just 24 hours before tip-off north of the border — was tempered by foul trouble for the fabled all-rounder.

Two points in just seven minutes for the three-time Eagle wasn’t the BBL return the 29-year-old had dreamed of after inking his latest deal in the North East.

But Gordon will surely benefit from another week of practice alongside his new team-mates ahead of Friday’s eagerly anticipated visit of Rahmon Fletcher’s Manchester Giants.

Further foul trouble for on-court leader David Cohn hardly helped Newcastle’s cause as one of this season’s standout players struggled to exert his influence on a fast-paced affair.

And the playmaker will have been bitterly disappointed with just three points and eight assists during an atypically disjointed 30-minute display.

On a night of few positives, Donovan Johnson’s 17 points, six rebounds and two blocks proved the veteran forward can play a significant role during the second half of the season.

And Denzel Ubiaro’s eight points in just 10 minutes offered the Eagles a disruptive option off the bench.

But for a coach who has worked tirelessly to instil a tougher defensive mentality, conceding close to a century of points on the road will have left Steutel hugely frustrated.

And Newcastle’s backroom staff must go back to the drawing board ahead of next weekend’s challenging double header against the free-scoring Giants and Bristol Flyers.