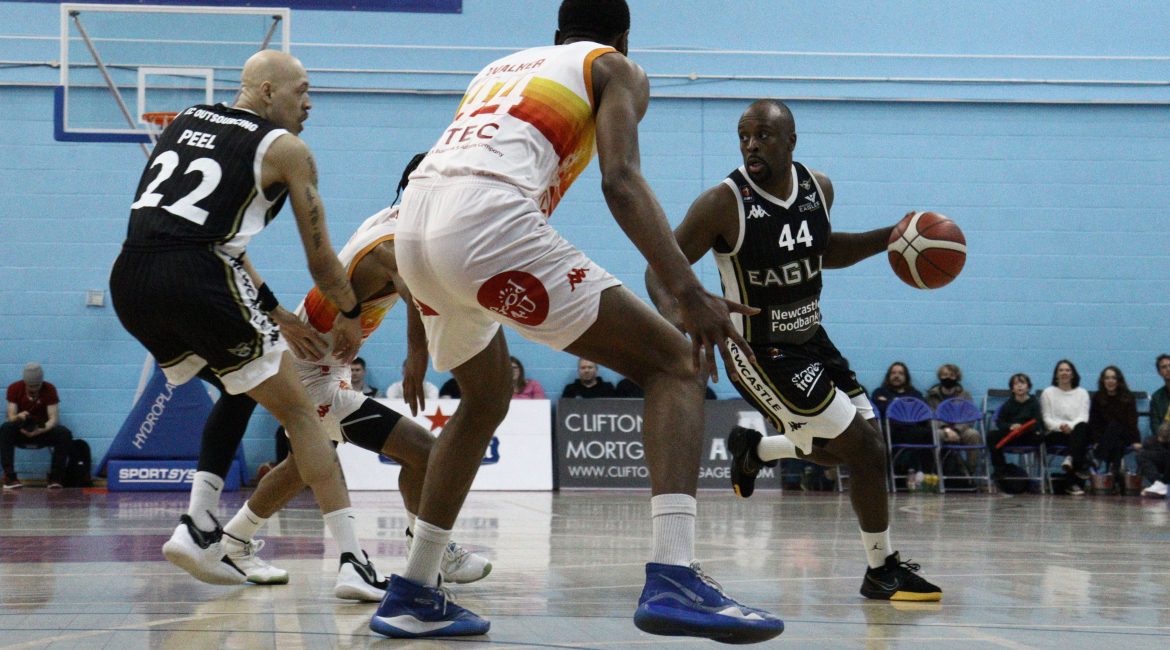 Newcastle’s playoff destiny is no longer in their own hands after the battling Eagles suffered an agonising last-second loss at Bristol Flyers last night.

A thrilling clash was tied at 81-81 with 26 seconds on the clock and it looked like advantage Newcastle after Trejon Jacob rimmed out with the second of two free throws.

But game changer Zach Simmons grabbed the offensive rebound and converted a two-pointer before blocking Corey Johnson’s lay-up at the opposite end.

In a frenzied finish to a fast-paced affair, Eagles’ Brandon Peel sent Marcus Evans to the line and the guard extended Bristol’s lead to three points with two seconds to play.

A desperate Rahmon Fletcher threw up a Hail Mary three to take the game into overtime but even the BBL’s two-time MVP couldn’t save a match the visitors deserved to win.

And the Flyers celebrated a 3-0 league series win against Newcastle to confirm their own invite to the post-season party.

In a cruel twist of fate the Eagles are now reliant on fierce rivals Leicester Riders to keep their campaign alive heading into the final weekend of the regular season.

That combination of results would set up a winner-takes-all shoot-out for the final playoff spot on Sunday with Newcastle set to face Plymouth in the South West.

But after a dramatic Easter weekend of red hot hoops action, the odds are shortening on the Eagles failing to finish inside the top eight for the first time since 1996.

Bristol are just one of a clutch of upcoming BBL franchises looking to leave the league’s most successful franchise in the shade this season.

Short-handed Newcastle had faded down the stretch in Friday’s fixture between the two teams as the Flyers clinched the final quarter 27-18 on Tyneside.

But coach MacLeod blamed lapses in concentration rather than fatigue — or the absence of Fletcher — on a potentially costly loss.

Shane Walker’s 11 points off 80 per cent shooting from the field was a source of particular frustration for the Eagles’ playcaller.

And MacLeod had demanded his players pay closer attention to the scouting report as the two sides squared off for the second time in four days.

A combination of smart offence and improved second quarter defence saw the visitors take a 49-44 lead into the half.

And if his players were sticking to the pre-match plan then MacLeod deserved huge credit for carefully managing a stretched seven-man rotation just 24 hours after a big win against Surrey Scorchers.

Not for the first time in his decorated BBL career, the Eagles captain rose to the task.

Fletcher was the architect of an impressive first half display and moved to a typically assured double double [correct] midway through the third period.

Newcastle’s playmaker had 16 points and 13 assists with 10 minutes remaining as the visitors took a 67-65 lead into the fourth quarter.

And after nearing his own triple double in Guildford the previous day, Justin Gordon was back packing the stat sheet with 22 points, five rebounds and five assists in the opening half hour.

A pulsating final period was decided in the last three minutes as Darius Defoe fouled out and Simmons stepped up.

Fletcher and Gordon combined for a mammoth 46 points, 19 assists and six boards and neither player deserved to be on the losing team.

But the crestfallen Eagles headed home focused on beating the Rocks on Friday…and praying Leicester can dispatch the Patriots.