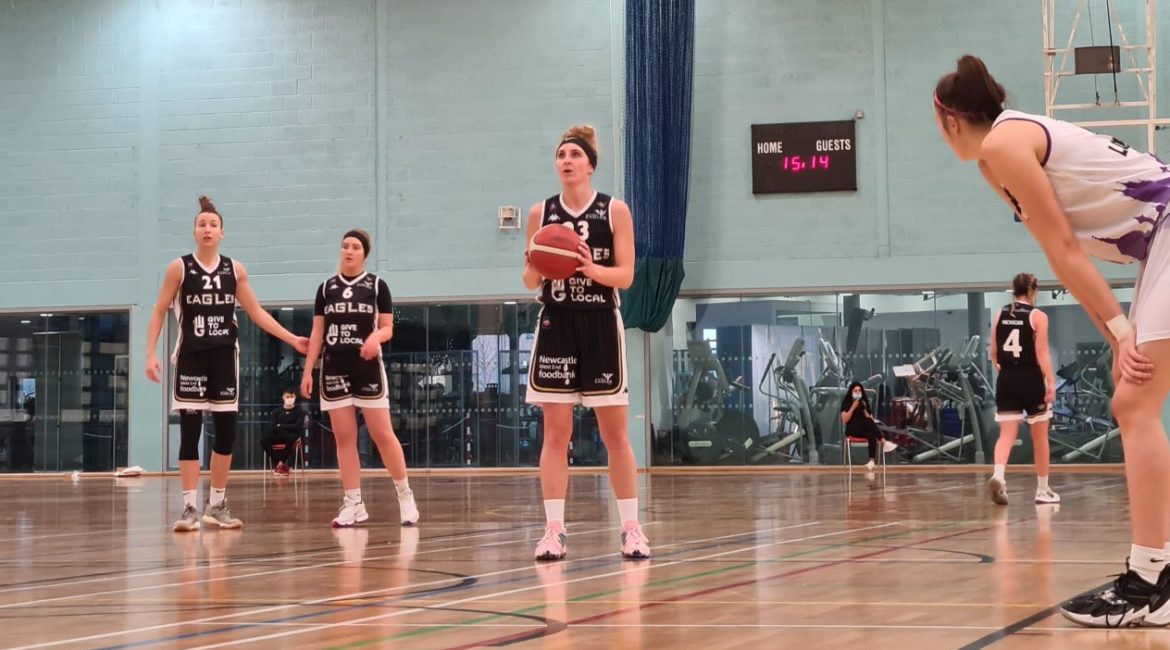 A stirring final quarter fightback wasn’t enough to save Newcastle Eagles from a third successive WBBL Championship loss in London.

Chris Bunten’s battling side clinched the fourth period 23-13 as the homecourt Lions found themselves in serious foul trouble and tiring fast.

But the damage had been done during a first half to forget with London’s Cassie Breen hitting five huge triples on the back of 8/11 from the field.

That Herculean effort helped the Lions roar into a 49-31 lead at the half and effectively kill the game as a contest.

But Newcastle deserve credit for holding Breen scoreless for the remainder of the game and finally showing their true colours down the stretch.

Ali Gorrell exploded after the break to finish with 22 points and seven assists and lead the Eagles’ unlikely comeback.

Ably supported by fellow guard Maddy McVicar, who added 19 points and hit a flurry of late triples, Newcastle’s returning favourite refused to throw in the towel.

And Lisa Koop posed a constant threat in the paint as the German centre netted 15 points and took five fouls.

But a third heavy defeat in eight days will seriously hurt a team desperate to live up to its pre-season billing as potential title contenders.

Bunten went into the Eagles’ final fixture of 2020 looking for the right response to the previous weekend’s double defeat.

But Newcastle allowed Breen to get hot early on and there was simply no stopping the former Central Michigan University shooter.

The Eagles’ scouting report might have suggested the visitors allow the Lions’ guard time and space to take her shots from downtown.

Breen had hit just one of 15 triples in her previous two appearances for London but this was the match she finally found her range.

And Newcastle trailed 24-16 after the first quarter as they struggled to keep pace with Mark Clark’s side.

Lions maintained their dominance throughout the second period but there were signs that Breen’s hot streak was over.

Bunten, seeking to mix things up and stay in touch, rotated his roster and Abby Lowe’s energy off the bench kept London keen.

The ex-Barking Abbey favourite hit a big three against her former club before scrapping for the loose ball on the floor.

And Lowe’s aggression appeared to sow the initial seeds of recovery as the Eagles started to attack Lions’ full court defence for the first time.

Bunten must have been disappointed to see London hit the first six points of the second half just when a strong Newcastle start was needed most.

But the visitors locked down Breen and forced Chantel Charles and Paige Robinson to commit a series of fouls as the momentum finally swung towards the visitors.

Lions might have felt the game was already won heading into the fourth quarter with a 72-49 lead…and they were right.

But the Eagles took the opportunity to find some confidence heading into 2021 as Gorrell and McVicar bossed an entertaining final period.

And between now and January 10 – when Newcastle visit Essex Rebels – Bunten will hope to turn his team’s fortunes around following a bitterly disappointing December.