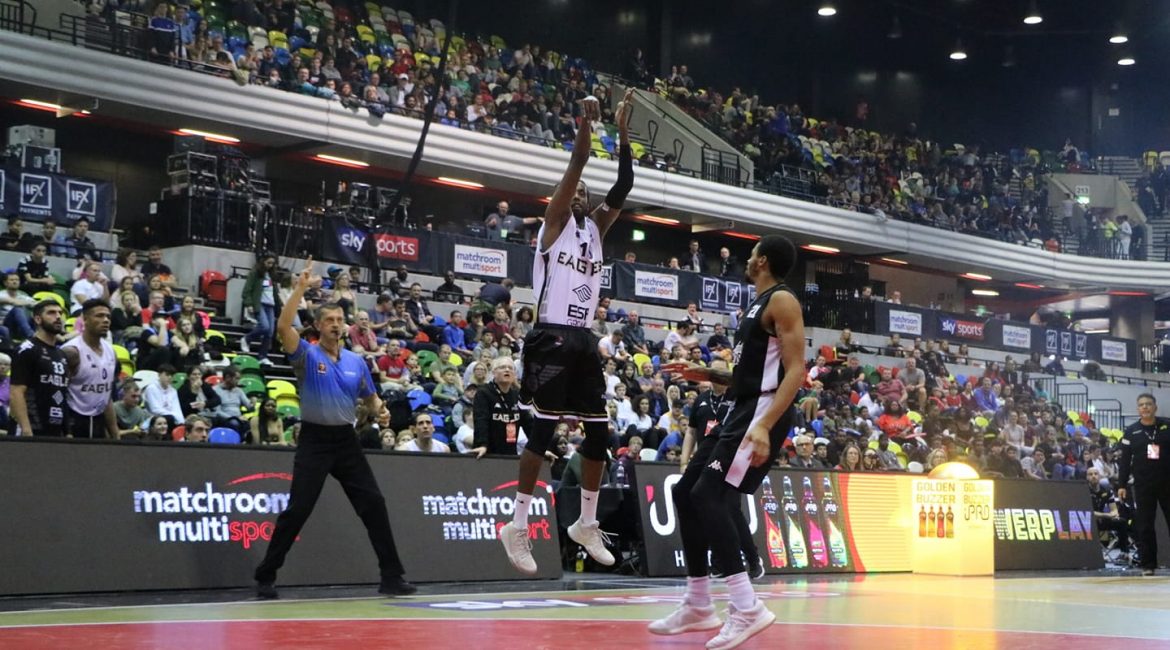 The Newcastle Eagles made the long trip down to London for the British Basketball All-Stars Championship and after a slow start they were involved in some tight games before falling in the semi-final stage at the hands of homecourt favourites and eventual winners London Lions.

For the third season in a row in this unique tournament the Newcastle Eagles tipped-off against fiercest rivals Glasgow Rocks. The two sides had already met twice in conventional basketball in the BBL Cup with both winning on their opponents’ court but this was a different proposition.

It had been close throughout with the Eagles gaining an early advantage during their golden buzzer powerplay which converted two of Rodney Glasgow Jnr’s triples in to six-point plays. It put Newcastle up by eight at 16 – 8 but Eagles couldn’t cash in to extend their lead.

Despite Glasgow producing a phenomenal personal performance against the team bearing his name, he actually had an incredible 23 of the Eagles 27 points in a fantastic shooting performance, it was Greg Pryor that helped see his side home in a breathless encounter.

His two three-point efforts in Rocks golden buzzer period nudged his side back in front and with Newcastle in foul trouble early and with those fouls being converted to points it enabled Rocks to record their first ever win over Newcastle in this tournament.

This left Newcastle to face Cheshire Phoenix in a final eliminator game which both teams had to win if they wanted to progress in the competition. Phoenix had had their heartbroken by a last second call in their first game and so it proved again in the eliminator.

This time it was Rahmon Fletcher’s last gasp two-point layup on the buzzer that gave Newcastle a 32 – 30 win to give them one more chance to make the semi-finals. Glasgow had been the star of the first game for the Tynesiders and it was his triple from the corner that tied the game at 30 – 30 to give Fletcher that chance.

Eagles had done well to restrict Cheshire during their golden buzzer two-minutes but the Phoenix did sneak ahead by six at 15 – 9. But Newcastle’s buzzer period saw them surge back with John Mitchell powering in a couple of buckets to put them up by six.

Cheshire came back well to score six points in a row before Glasgow and Fletcher’s final play heroics gave Newcastle one more chance to make the semi-finals with ironically Glasgow Rocks once again being in their path.

This time it was the Eagles that prevailed as they made it through to the semi-finals in yet another tight game by taking down the Rocks 28 – 24. Strangely enough in a tournament where shooters are meant to be at a premium it was two of Newcastle’s big men that made the difference.

Darius Defoe led from the front scoring his side’s first nine points and anchoring the defence that meant they finished the Glasgow golden buzzer period only down by four points. Then it was Mitchell who produced two power-plays in the Eagles double point period to put them out in front.

From there Rod Glasgow and Fletcher controlled the final few minutes to take Newcastle through to a semi-final clash against The BBL Champions and home court side London Lions for the chance to play Sheffield Sharks in the final.

The Eagles had flown ahead early in the 12-minute game thanks to superb use of their extra-point period which in two minutes turned a 7 – 2 deficit in to a 22 – 9 lead. But great use of their golden buzzer saw a great Lions fightback and they shot the ball well with Justin Robinson in fine form.

With Newcastle in foul trouble late on, the Lions held on and edged out the Eagles as the points from fouls came in to play and Newcastle couldn’t find a way back and just missed out on the final.

In the final it was the London Lions who won their second British Basketball All-Stars Championship in the third year of the competition as they took a 39 – 33 win over the Sheffield Sharks with the outstanding duo of League MVP Justin Robinson and the tournament’s deserved MVP Brandon Peel.