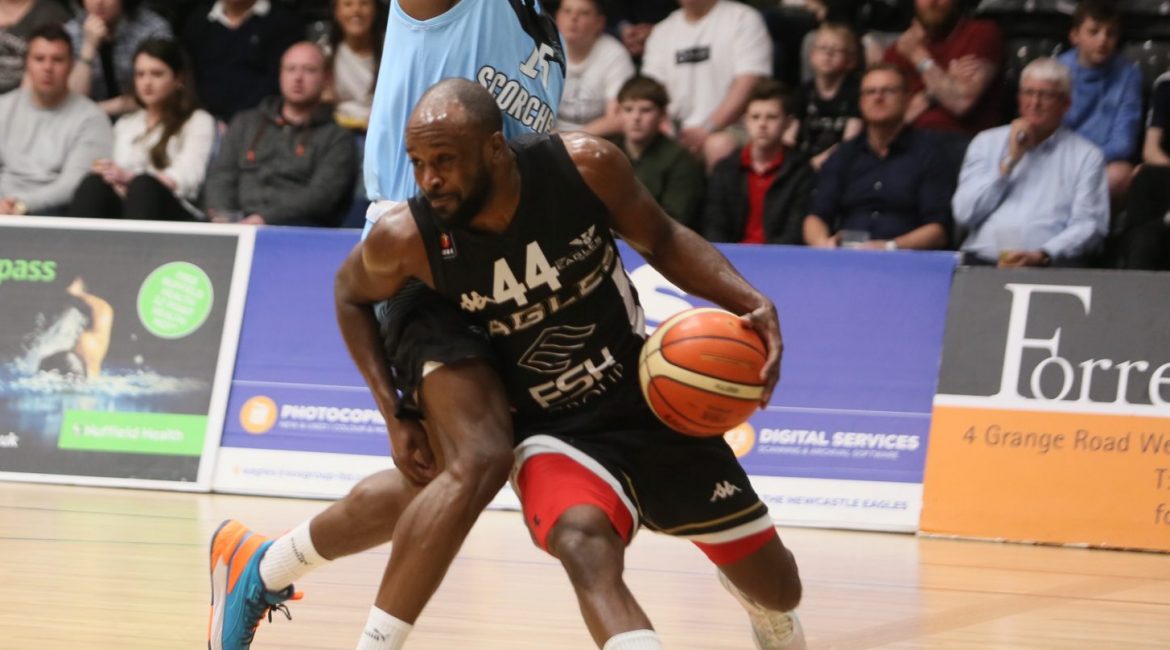 Quite remarkable is one of the only ways to describe what Esh Group Eagles Newcastle achieved last Friday night in their thrilling 105 – 97 win over Surrey Scorchers at the Eagles Community Arena.

From the opening tip they had 45 points worth of talent sitting on the bench injured in Victor Moses, Darius Defoe and Jeremy Smith. Head Coach Fab Flournoy only had seven players at his disposal including himself but somehow, someway the Eagles fashioned a memorable win.

They went in to the final quarter down by 13 points but somehow forced overtime and then took the game over in that extra five minutes to pick up an unlikely looking win. There were heroes all over the court for Newcastle. Flournoy at aged 45 played over 42 minutes. The Williams brothers Kai and Jamal contributed.

Local lad Eddie Matthew started. Veteran guard Drew Lasker had a double-double of 10 points and a career-high equalling incredible 17 rebounds but the two men who had career nights and took most of the plaudits were rookie Kyle Williams who netted 34 points and mercurial point guard Rahmon Fletcher.

With Moses, Defoe and Smith out it needed something special from Fletcher and 38 points, 10 assists and 7 rebounds was exactly that as he pulled everyone around him to greater heights and led his team to a victory which still gives them an outside chance of finishing second in The BBL Championship.

He was an exhausted but happy man at the end of an epic encounter.

“I think we were mentally prepared for this game as we knew what the numbers were going to be. We had to pace ourselves. We didn’t want to go out and play our normal defence and then just crash in the third quarter. I think we did a better job pacing ourselves this game so we were able to push it in the fourth and in overtime.”

“One thing that Fab’s always told me was be professional in unprofessional situations and we know Surrey are still a tough side even though they are at the bottom of the league. We had to be smart. We’re about to go in to the play-offs so this was a game to rest those other guys who needed it.”

“I think this might have been the biggest game for our will to win all season and that’s a great credit to all as we cold easily have just ignored this game as unimportant but we didn’t want to do that and despite only having seven players we wanted the win.”

A win was what Newcastle got and as stated; Fletcher was a huge part of that as he normally is from his on-court general role.

“I think the seven rebounds is the thing I’m most proud of. I think everything I did I needed to do. Every point, every rebound, every assist but everyone stepped up to be honest and it was an amazing feeling at the end.”

“Everything was needed. With Kyle And Drew stepping up and in to the spots where we had guys missing and doing what they did is a huge credit for them and shows they’re ready when we need them. That makes me super happy for them and the team.”

The Eagles now have two final regular season games to play and they are back-to-back with a trip to Sheffield next Thursday night before the final regular home league game against London Lions who will probably arrive on Tyneside as the league champions.

“We have to take it one day and game at a time. Right now, we don’t have a lot of players who can take time off and sit out because of our injury situation. But it depends on the circumstances of the games. If the games are meaningless, we can rest more or maybe we need to stay in rhythm.”

“I’d like to have a rest and some time off but I also like the flow and rhythm I’m in right now so we just have to see what we’ve got when we get to next week and take account then.”

One thing is certain, if a seven-man rotation can produce 105 points and a performance like this, a fully-fit and firing Eagles roster can certainly make some noise in the forthcoming play-offs.