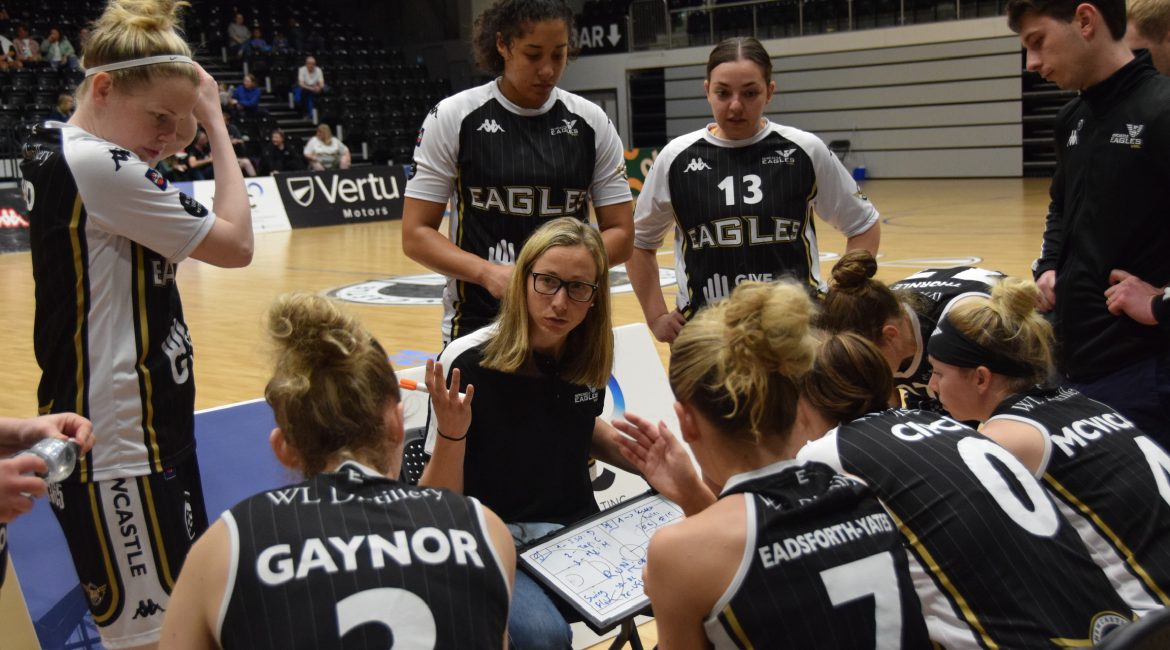 That’s the verdict of Newcastle playcaller Noelia Cacheiro as her Eagles bid to become only the second team this season to inflict a league loss on the soaring Suns.

But Newcastle are playing some of the best basketball of their season following back-to-back wins against Gloucester and Durham.

And ahead of tonight’s Vertu Motors Arena clash Cacaheiro said: “I want my players to learn from this weekend.

“One day soon I want them to get to a position where they are making their own decisions and the right decisions during the game.

“That’s what Sevenoaks do. Their coach allows his players a lot of freedom because they’ve been together so long and the trust runs both ways.

“What the Suns’ experienced players do so well is lead on court and set the tempo.

“They might not be leading the league this season but as a club they’re still the benchmark in the WBBL as far as I’m concerned.

“They never panic and they always look like they’re in control. But again, that comes from the coach.

“Len [Busch] never looks rattled and when he calls a time out it’s always a calm discussion and a reinforcement of the gameplan.

“Sevenoaks can turn it on and off and when they turn it on they’re an incredibly tough team to beat.”

Carr only made the bench in the latest WBBL All-Star 5 despite bagging 27 points against Caledonia Pride last weekend.

One of the WBBL’s most talented players enjoyed a brief but brilliant spell on Tyneside during the TN era.

But as a mainstay of Busch’s blazing Suns, the American has driven an era of unprecedented success for the Surrey-based franchise.

“Cat is a very good all-round player and is always difficult to play against,” added Cacheiro. “But it would be wrong to focus on one player.

“The Suns have threats all over the court and we have to manage our expectations going into what will be an extremely tough match.

If Carr failed to force her way into this week’s All-Star 5 then Newcastle duo Chloe Gaynor and Layne Murphy deserved their place amongst the pick of last weekend’s star players.

The former played all 40 minutes against derby rivals Durham Palatinates and emerged with an MVP haul of 22 points and 15 boards.

Murphy, meanwhile, showed glimpses of her best form with back-to-back double doubles in an Eagles vest.

And the US forward bagged her debut All-Star berth thanks to 15 points and 11 rebounds against Gloucester City Queens.

That win against the WBBL’s basement club was soured by a last-minute injury to all-action Croat Dora Cipcic.

But the do-it-all guard avoided a broken ankle and was back on her feet 24 hours later — albeit with the assistance of crutches.

“We’ll have to wait and see just what Dora can contribute between now and the end of the season,” added Cacheiro.

“It’s a relief that she hasn’t broken anything but were taking it day by day and we’re aware of the big games coming up that could decide our final league position.”

With six league games to go, Newcastle are right in the mix for a top eight finish as one of three sides in the top 10 locked on 11 losses.

But the underdogs have it all to do against an experienced and deep Suns side tonight (7.30pm tip) before vital Easter weekend clashes against Nottingham and Essex.

Tickets are available on the box office in advance and on the door.