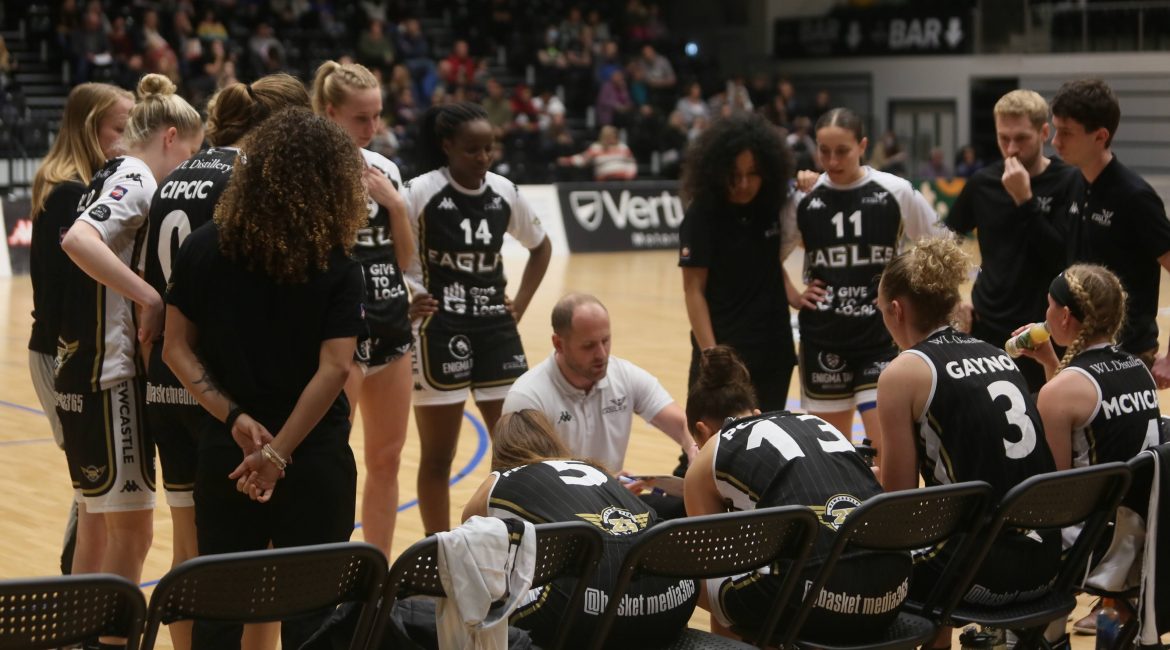 The two fierce rivals lock horns for the first time since May’s WBBL Playoff final when Mark Clark’s side prevented a fairytale finish to Newcastle’s campaign.

And buoyant London bring a 5-0 Championship record to the Vertu Motors Arena just seven days after securing their place in the WBBL Cup final in emphatic fashion.

“Let’s face it — the pressure’s on the Lions,” insisted Eagles’ playcaller Chris Bunten. “Nobody outside of Newcastle expects us to win this game so it’s a free hit from our point of view.

“I’m looking for my players to turn the game into a real dogfight and we’ll see what happens.

“I’ll accept a few mistakes and if London suddenly hit a load of shots from beyond the arc then so be it.

“But I’ve challenged my players to make life as difficult as possible for London.

“We have to forget about the big names and the big reputations and focus on our own performance.

“Let’s go out there and compete with the best team in the country and one of the best women’s teams this league’s ever seen.”

The homecourt Eagles have it all to do against a London roster boasting many of the biggest names in British basketball.

But Newcastle have won three league games on the bounce and face a Lions side soundly beaten in Wednesday’s EuroCup clash in the Czech Republic.

“I have such a high opinion of my own players that I hold them to a very high standard every week,” added Bunten.

“As a result, I always tend to focus on what they could be doing better.

“Take last weekend at Nottingham. It was a fantastic win but it was a victory tinged with frustration because we almost threw it away.

“I’m thinking about our poor ball management at the end of the game when we’ve actually won our third match in a row.

“There’s still a long way to go but of course we have a chance against London.”

The Lions arrive on Tyneside on the back of a 68-41 loss at Zabiny Brno in their latest EuroCup group game.

And that comprehensive win earned both Shanice Beckford-Norton and Jo Leedham-Warner places in the latest WBBL All-Star five.

It was GB star Beckford-Norton who ran the show in last summer’s WBBL Playoff final as Newcastle’s post-season charge finally came to a halt.

And Bunten admitted that the Lions boast an embarrassment of riches thanks to the ongoing investment of the club’s ambitious owners.

“We can’t really worry about who might or might not be playing because whoever starts this weekend will be a quality player,” he added.

“I prefer to look at it as an opportunity for my young British players to test themselves against the very best.

“Can Chloe Gaynor and Anna Popovic control the paint? How much of an impact can Ebony [Horton], Jess [Eadsforth-Yates] and Abby [Lowe] make at the offensive end?

“Can we make their players work hard for every possession and every shot?

“That’s what I’ll be looking at for 40 minutes and we want to walk off the court knowing London have been in a game.”

Tonight’s clash tips off at 7pm and tickets are available on the box office.