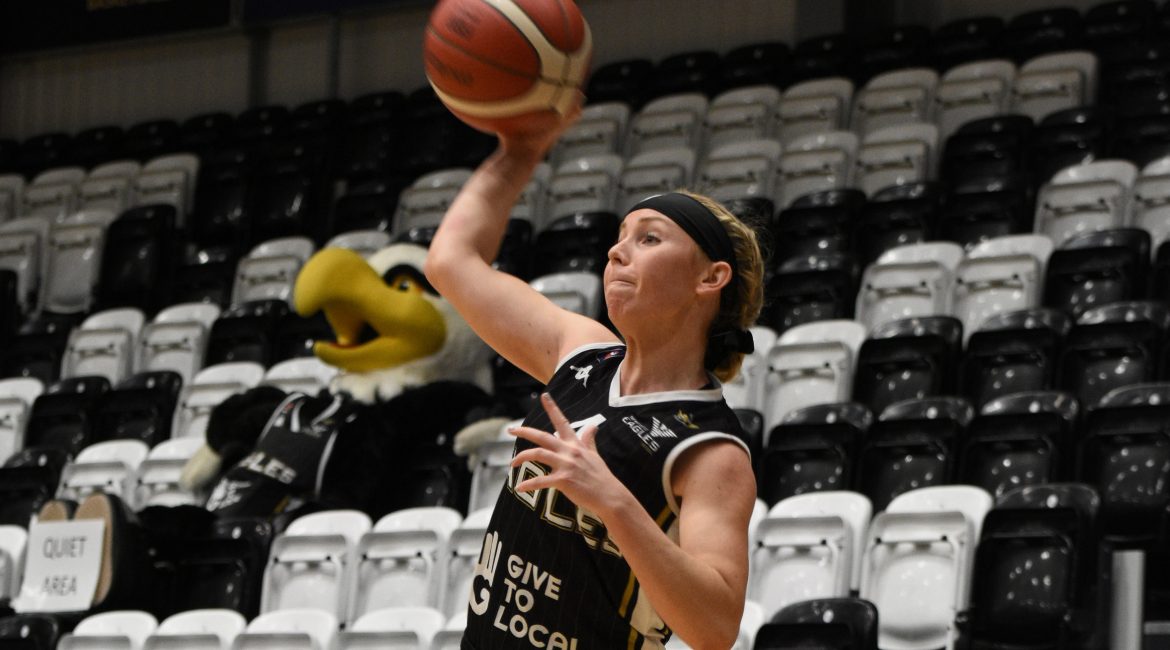 Maddy McVicar insists she’s loving every minute of her Newcastle Eagles adventure as the livewire guard continues to triumph in the face of adversity.

And the WBBL rookie is already considering a second season in the North East after admitting she’s keen to experience post-pandemic Tyneside.

Rookie McVicar has averaged more minutes than any other player in British basketball’s top division after being asked to shoulder some serious responsibility as a first-time Eagle.

But she said: “I’ve loved it so far and the experience has been really special.

“Everyone around me is great and they’ve made my job so much easier.

“I’m playing a lot of minutes but that’s something I’m more than happy to do. The players around me are doing a fantastic job so it doesn’t faze me at all.

“I look at the quality of my team-mates and they’re ready to go every week.

“It’s amazing how far Millie [Oates], Ori [Chukwu-Etu] and Abby [Lowe] have come in a short space of time this season.

“It’s great to see and I love being a part of this group as it grows in confidence.”

And victory could propel Chris Bunten’s side into the top half of the table for the first time this season.

“We want to prove to ourselves and to our opponents that we can be better,” added McVicar.

“That’s been our attitude for the last few weeks. We’ve been more consistent and more focused since the end of February.

“In the first half of the season there were too many games where we’d play well for three of the four quarters but one poor period would let us down.

“I think we’ve reached a point now where we can maintain a certain level across 40 minutes.

“The game against Pride last month was a classic case of losing our focus when it mattered most.

“It’s a game we should have won and we’re excited to have a chance to put things right this weekend.”

McVicar arrived in Newcastle surrounded by talk of winning titles and scooping silverware.

Those expectations were swiftly revised as coach Bunten lost two players to season-ending injuries within weeks.

And the short-handed Eagles suffered a further blow when experienced internationals Mante Kvederaviciute and Lisa Koop were lured to Germany in January.

“It’s been a tough season but it’s something I’ve experienced before,” added McVicar.

“In my last year at college we suffered a series of injuries and we were down to seven players for a while.

“So what’s happened at Newcastle is nothing new and it’s all about how we adapt to the challenge.

“It’s taken us some time to iron things out but I think everyone’s starting to see just what we’re capable of.”

McVicar is studying for a Masters degree at Northumbria University as well as partnering Ali Gorrell in the Eagles backcourt.

That course comes to an end this summer but she added: “I’ve already thought about returning to Newcastle next season.

“I’d like to experience life here outside of a pandemic. I love living here but I don’t feel as if I’ve been able to make the most of my time in the North East.

“If the opportunity is there to return then of course it’s something I’d think about.”

Today’s action gets underway from 1.30pm. For details of how to watch Newcastle Eagles in action against cross-border rivals Caledonia Pride visit the club website.