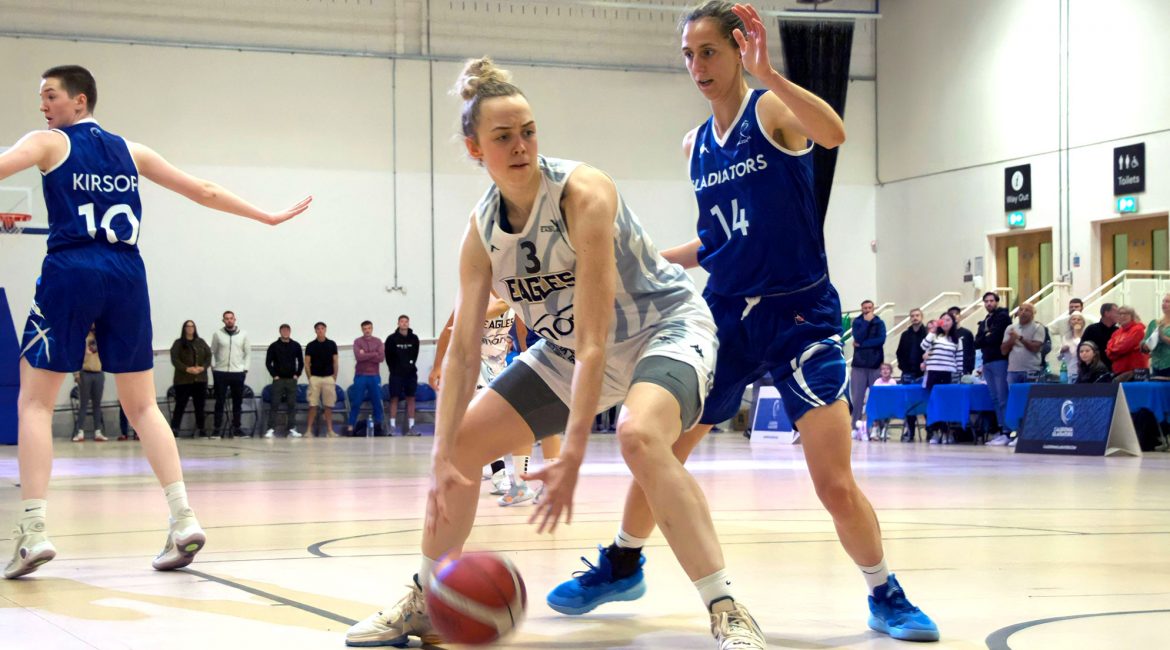 After their record breaking 99 – 72 victory last time on court, the Newcastle Eagles Women’s team return to WBBL action with a trip to Manchester Met Mystics this afternoon.

The 99 points is the most a Newcastle side has ever recorded in their history and has increased the confidence in the camp that Head Coach Noelia Cacheiro’s side may finally be finding their feet this season.

Centre Chloe Gaynor who has returned to full fitness recently and played a significant part in that win over Wolves reflected on the difference the result has made to the team as she previewed today’s matchup with Mystics.

“The mood is great. We had a really good last practise session and the confidence the win gave us and the fact that we all took part in the game and shared the responsibility was good for us”, said Gaynor.

“It was that kind of win that people across the board were contributing gives us that increased confidence going into todays game and longer term with Durham coming to Newcastle next week.

Eagles Backcourt Can Boss The Big One
January 6, 2023

“We know we have potential. It’s just a matter of finding all the pieces of the jigsaw coming together. We’ve put the corners and edges in place and it’s about finding the confidence and context to fill in the other pieces.

“It’s about being more apparent in everything we do. Barring Courtney (Claesen) we have everyone fit and healthy and ready to go. We’re finally finding that groove and learning how to play with each other in a way that suits our style of basketball.”

On paper this afternoon’s game looks a very winnable game. Manchester have had a tough start to the season and they are yet to win a WBBL game in five attempts. A lot different to the ‘normal’ Manchester standards.

“Manchester have always been a tough team to play having been run by Jeff Jones for so many years. They always had Georgia Jones, Dominque Allen and Rheanne Bailey who dominated in the WBBL and indeed for the National side”, the centre added.

“It’s a different look for Manchester not to have those three but that’s not taking away from the talent that they do have. Leah McDerment (15.3 points per game) who was with London Lions last year is a high calibre player and has some talented pieces around her.

“They are a well-balanced team and I’ve been surprised they’ve struggled so far this season. They’ve had the last four weeks off but if anything that could inspire them more to come out against us firing.

“I think the keys to the game for us is our inside-out play. They match up well with us inside and it’s going to be an interesting test for Nette (Lewis) and Katie (Nolan) who have been superb for us and myself as well.

“The key for us is finding the balance and if the inside is not working making sure we can go to our outside game and vice versa. We are a good squad of different skill sets. It’s maximising those skill sets that’s going to be our key.”

With Lewis and Nolan both averaging double-doubles so far this season and Gaynor not far behind herself it’s obvious where the Eagles strengths lie.

But with Marina Fernandez, Maggie Justinak, Zoe Willis and Rachael Bland all at Cacheiro’s disposal there’s plenty of armoury in store for Newcastle as they look to improve on their 2 – 4 record, take the road win and move closer to the play-off places

Tip-off is 3:45pm in Manchester and the game is free to watch on the WBBL YouTube channel.