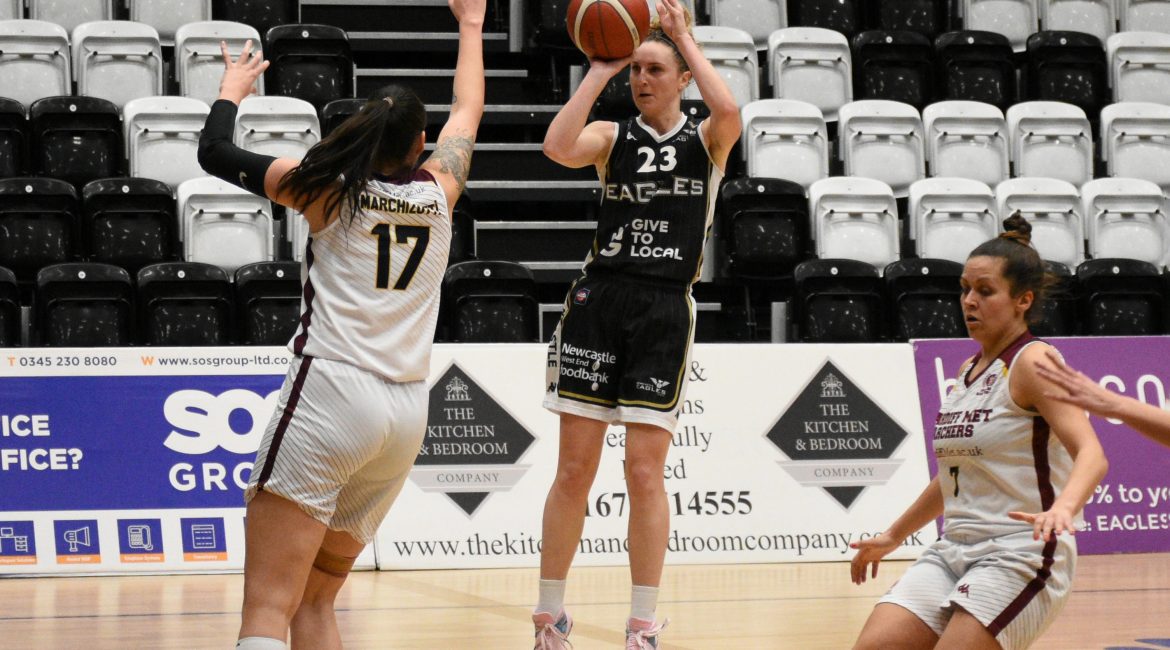 Beaten but unbowed Newcastle Eagles take on Cardiff Met Archers this afternoon seeking to spark one of the greatest comebacks in WBBL history.

But the struggling Tynesiders will have to come from way behind in this season’s playoff race without any reinforcements.

Head coach Chris Bunten has failed to make a fresh player breakthrough in time to beat this month’s transfer deadline.

And as a troubled league season lurches towards the halfway stage, Newcastle’s wafter-thin squad heads to Wales with a woeful 1-8 Championship record.

But Bunten is convinced his short-handed roster can upset the odds and claim a top eight finish in time to crash the post-season.

“The goal is still to make the playoffs but our performances need to improve at both ends of the court if that’s going to happen,” said the Eagles playcaller.

“I can’t deny that this team always brings a ton of effort and commitment to the court but we need that effort to be focused.

“Too many times this season we’ve taken our eye off the ball and allowed the opposition to score easy points.”

Every game is must-win for Newcastle now as they seek to claw back lost ground on the teams above them and seal an unlikely top eight finish.

And once again all eyes will be on Ali Gorrell in the Welsh capital as Newcastle’s co-captain seeks to set the tone at both ends of the court.

The US guard is the WBBL’s most fouled player by some distance this season — and for good reason.

Gorrell is averaging 24 points per game during her second spell on Tyneside and the opposition scouting report inevitably focuses on the Eagles’ most potent scoring threat.

“It’s remarkable that Ali has the best opposition player guarding her every week and yet she still keeps coming up with the big numbers,” added Bunten.

“Teams will deny her the ball, throw their best defenders at her, double team her and she still finds a way to score and shoot just under 50% from the floor.

“Almost every basket she scores is a tough shot to take and she’s getting fouled at least six times a game — according to the box score.

“But I’d argue she’s getting fouled much more than that. Even so, she keeps battling away and her attitude is just incredible.

“I’d love to reward her with a better contract next season. She deserves to be rewarded for her commitment to the club.”

Today’s clash tips off at 1:30pm and fans can watch live on the WBBL YouTube channel.