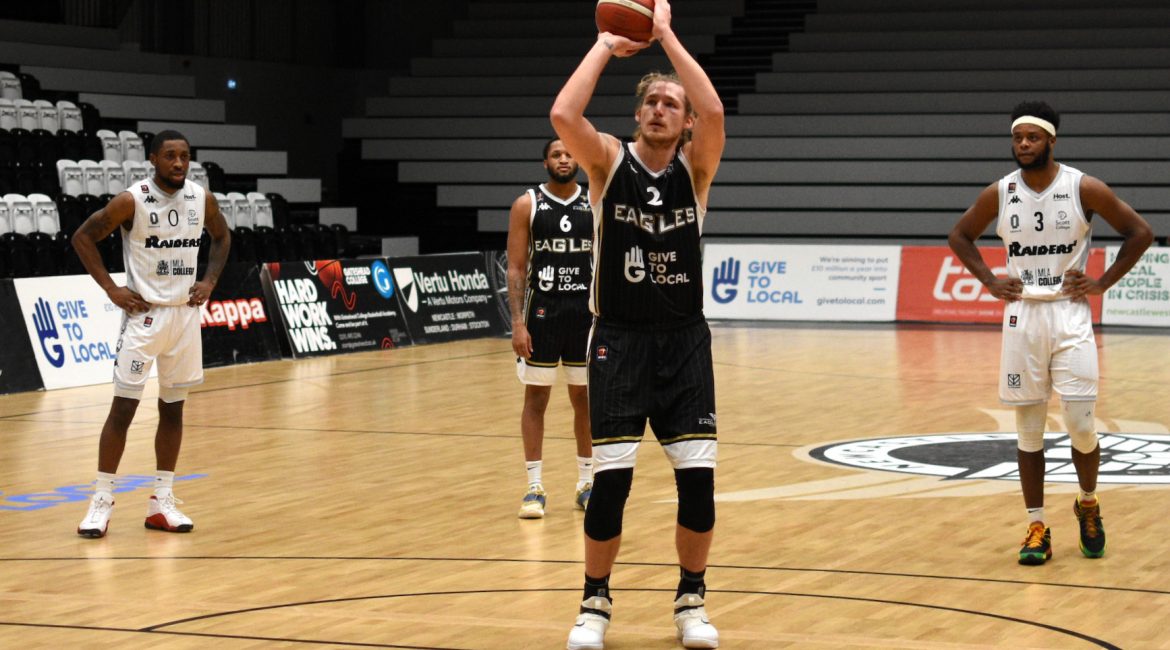 Newcastle Eagles are back in BBL Championship action tonight at the Eagles Community Arena a week after their last outing when they beat Cheshire Phoenix 80 – 73 at home. The midweek fixture at Bristol Flyers was postponed in accordance with the BBL’s Secure Play Protocols.

It’s the Plymouth Raiders who come into town looking to keep their recent hot streak going. They went 6 – 1 during the month of February, figures that saw Coach Paul James, who celebrated his 1000th BBL game as a Head Coach, take the BBL Coach of the Month award.

The two sides have already met twice in the league this season with both remarkably winning on their home court by the same 77 – 76 score line. This game will settle the head-to-head series between the Clubs and could have a real bearing at the top of the BBL table.

Looking back at that win over Cheshire, it was anchored by Centre Evan Maxwell’s 24 points and he discussed that performance as well as previewing tonight’s game against the Raiders.

“The feeling against Cheshire felt a little foreign at first after losing three in a row but it’s a good feeling to have back and hopefully we can instil that and continue the momentum going forward. I think it’s about us sticking together.

“We’ve been without Justin Gordon for five games now and that makes it tough for everybody especially as it seemed like we were not ever going to get a night off until that Bristol postponement.

“Cheshire came in red-hot having won five in a row. But every night we’re going to get every teams best effort. So, no matter who we put on the floor we have to play together and play as hard as we can it’ll always give us a chance.”

Despite picking up two fouls early on and having to sit for long periods in that first half Maxwell came back in devastating style in the second half and really provided the offensive power his side needed when challenged.

“It’s something I’m trying to get better at early on. Sometimes I can control it and sometimes it’s out of my control. Whatever happens, happens and it’s about putting it behind me and moving forward and giving the team whatever, I can give them.

“It’s about continuing to bring energy and not being passive with the foul trouble and continuing to be aggressive. My teammates and Coach were great in communicating some things I was doing wrong on defence and I was able to make the adjustments.”

Plymouth tonight once again puts an in-form and tough rival in front of Maxwell and his fellow Eagles and he knows that once again they all have to be ready for the task ahead.

“It’s about building on the momentum of last Friday both as a team and individuals and taking the confidence into the game. Whoever it is in front of us whether it’s a top team or a bottom team it’s about us and taking care of what we can control.

“The Bristol game being postponed has allowed us some extra time to come together as a group and reset a bit going into this last part of the season. It feels like it’s been a while since we’ve had more than just a few days between games.

“This is important time for us to continue to grow, taking care of our individual needs but more importantly growing as a group. We know we’re facing an opponent that’s given us a battle each time we’ve played.

“So, we need to be prepared to fight for 40 minutes, bringing energy and communication to be the aggressor on defence and moving the ball, playing together with confidence offensively. When we do those things, we put ourselves in the best position to beat whatever opponent is before us.”

It’s second-placed Eagles against fourth-ranked Raiders in what should be an exciting and tight encounter.

Fans can watch live on the BBL Player with coverage starting from 5:50pm and tip-off at 6pm.