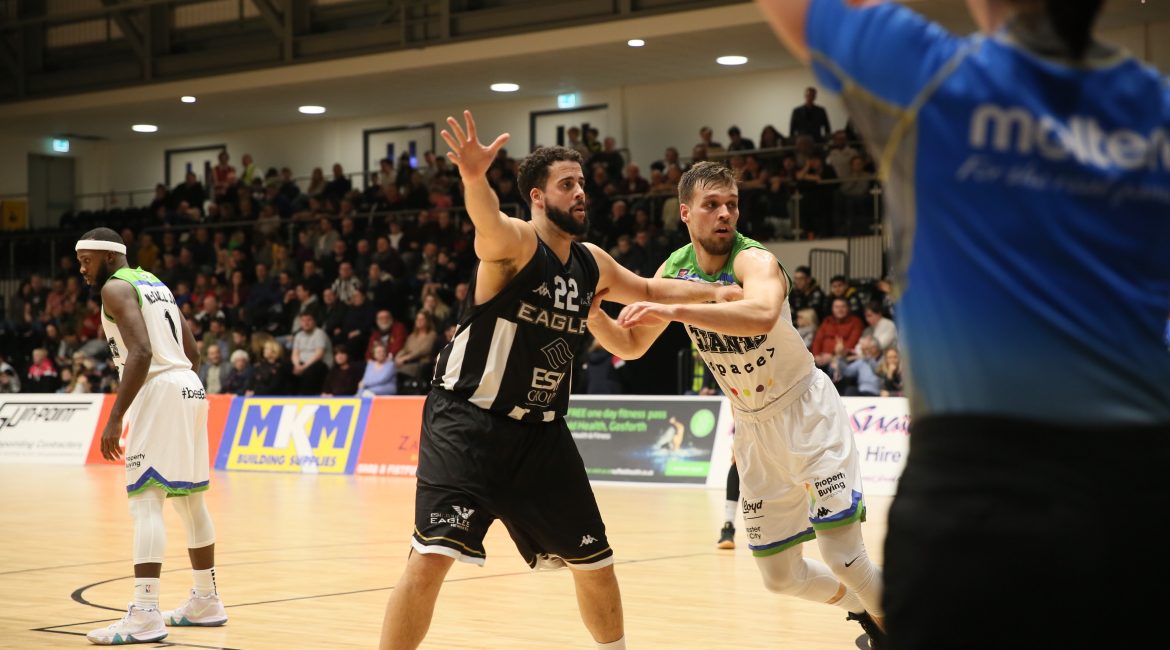 It’s very rare that a team playing at home goes in to a game against a visiting team that has a better record than they do in their own arena but Esh Group Eagles Newcastle face that very conundrum tonight as they prepare to play the Manchester Giants in a BBL Championship clash, writes Jeff King.

But that’s the situation facing the Eagles tonight as they play their third game in the new Eagles Community Foundation looking to record their first victory in the building. Their opponents, Manchester, know exactly what it feels like to win in the brand-new venue.

Three weeks ago, they came in to Newcastle and left as somewhat surprising 89 – 71 victors knocking the Eagles out of the BBL Trophy. Head Coach Fab Flournoy and his players will certainly be looking to reverse that result tonight and keep their push towards the play-offs going.

Newcastle go in to the game with confidence after producing an excellent 103 – 92 road win at Worcester last time out. For forward Jamal Williams that was a team performance much more akin to what they want going forward and needs to be repeated.

Williams himself produced arguably his best game of the season with 19 points and 5 rebounds and certainly that added to the pleasing effect of such a sound victory.

“It was a good win and one of our better all-round performances. We had 31 assists and five players in double figures and we all contributed well. For me, personally it was nice because this has been one of my tougher years and it was a more consistent full game from me which I was happy with.”

“It also helped having Vic (Moses) back as he’s one of the key components of our team both offensively and defensively. Having another “big” in the rotation obviously helps as until we had Vic back, we only really had two in the rotation.”

Certainly, Moses can make a big difference for Newcastle tonight as he was injured and missed out in the last clash against Manchester who are a tough team as Williams pointed out.

“This is a much better Manchester team than we’ve played in the past. This team is very good. They have some tried and trusted BBL veterans and some solid new imports and players that compliment those veterans very nicely.”

“The main thing from the last time we played them is learning from it and we have to play better defence this time. When we play good defence it really helps our offence as well. We also have to make sure we win the battle of the glass and keep “Big” Willie Clayton off the boards and try to neutralise him.”

Clayton is Manchester’s top scorer but equally importantly is not only their leading rebounder but leads the whole of The BBL in rebounds at a staggering 14.9 per game. He’s certainly the one-man Eagles need to tame if they are to record that elusive win. Having Moses back again helps.

“Having Vic back helps us enormously on the boards at both ends. He also brings a sense of calmness and confidence to the roster. We’ve missed him whilst he’s been out as he’s a big part of what makes us better as a team.”

Jamal’s brother Kai missed last weekend’s game and the Eagles are hoping to have him back in the rotation tonight although it’s touch and go as to whether he’ll make it and it may be a match-night decision.

“I spoke to him earlier and he’s hoping to be back which again would help us all. Obviously, we’re desperate to get that win and get up and running in our new home. I think it’s really important that we stick to our game plan and stick to our roles.”

Tickets are still available to purchase online, by calling 0191 2453880 or limited numbers of tickets will be available on the door, but we recommend booking in advance to avoid disappointment.