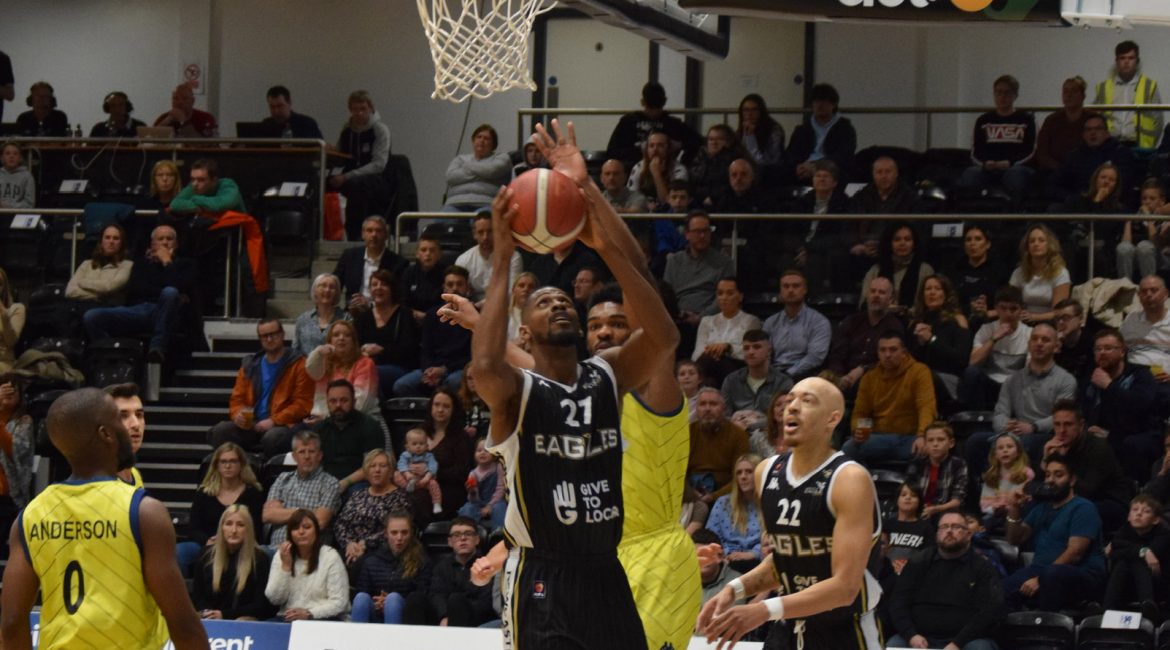 Newcastle Eagles return to the court tonight at the Vertu Motors Arena to take on the might of London Lions in a BBL Championship clash. The Lions are currently the favourites to win just about everything domestically this season with a powerful roster.

They have only lost one game to a BBL side this season. In the Cup group games they lost to Leicester but still won the group with a 7 – 1 record and have already knocked out Sheffield Sharks comfortably in the quarter final. Sheffield who seven days ago beat Newcastle on their home court.

Add in the added impressive record that Lions have in Europe where they have qualified for the second round of games in the FIBA Europe Cup and it’s clear that Newcastle have a tough task on their hands tonight.

One of the key components to Newcastle’s hopes of a win against Lions tonight could well depend on the form of Eagles Centre Duke Shelton. ‘The Duke’ has been in sparkling form for his new side this season averaging a double-double of 14.5 points and 11.5 rebounds a game.

His work at both ends of the court has already seen him established as a favourite with the Eagles fans and his teammates are particularly impressed with his defensive efforts on their behalf this season.

Shelton started his preview of tonight’s game by looking back at last weekend’s loss to Sheffield.

“All losses are disappointing but we can’t win them all. We prepared for about two weeks for them but then we came out and didn’t get the job done. We weren’t happy with it but we can’t hang our heads on last Friday.”

“The season continues and we have to look forward to the upcoming games. We’re just looking to get out on court tonight and also at Cheshire on Sunday and try to continue to grow as a unit and continue to get better together.”

Despite the pedigree and power of London, Shelton is more concerned with his team and his own performance when looking at tonight’s match-up.

“I’m not really too concerned about it as at the end of the day it’s basketball. They are a really good team with a long roster but I think we’ll match up fairly well with them. Our biggest thing is staying in the game mentally, executing offensively and just being there defensively to make it tough for them.”

“It’s about looking after and at our own performance first. When you have a team like London who are a Euro cup team you know they’ve got a good amount of talent. But we have some BBL veterans that have great experience as well.”

“You can’t get caught up with what they have. You have to focus on yourself and take care of the things amongst yourselves and then mostly likely you can have some success.”

Shelton has shown he’s a player that enjoys playing in front of the Newcastle public and is one that wears his heart on his sleeve giving it everything every time he goes on court. Something that is well appreciated by the fans and his teammates.

“I’m not a stat guy at all. I’m a guy that comes out plays hard and I like to make sure the fans get there money’s worth. I just let the stats fall where they may. I pride myself on my defence because I believe that defence is a choice.”

“You have a choice to play defence. You can go out every night and give a 100% on the defensive end. You can’t control whether your shots may be falling or if you have an off night offensively.”

“But defence is something that you can go out and make up your mind to do and that’s what I always try to do.”

There’s no doubting that the Eagles need a big performance from everyone at both ends of the court if they are to live with a very talented London side tonight. But there’s also no doubt that they have the determination and talent of their own to do exactly that.