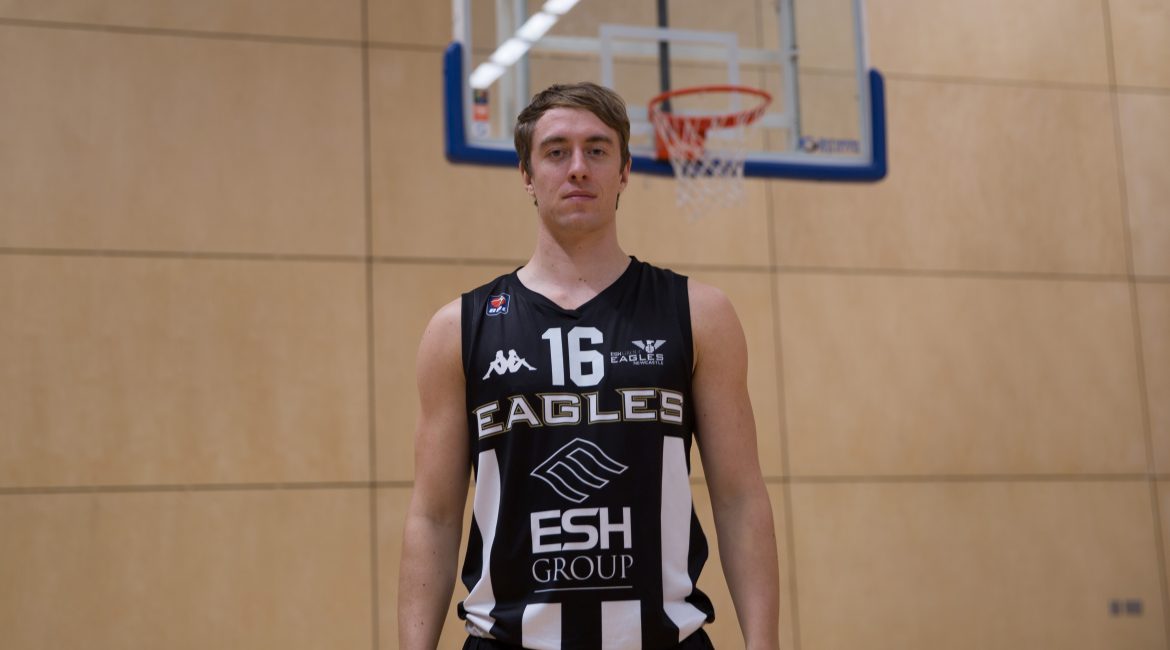 Esh Group Eagles Newcastle are looking to leave Northumbria University Sport Central tonight on a winning note as they close their tenure on one venue prior to opening the doors to their purpose-built new Arena early next year.

Their opposition tonight in a BBL Trophy first round tie is the pride of domestic Scottish basketball, City of Edinburgh Kings whose roster is made up entirely of players brought through their own ranks. So, who better to preview the game than Eagles own Scottish International, Eddie Matthew.

Matthew who qualifies for Scotland through his father has played at a senior level with some of the Kings players and is probably the one Eagles player who may have some idea about the standard of the opposition.

“I think it’ll be a good test especially for Edinburgh. They’ll definitely be up for a fight with a BBL team with a history like ours. I think hopefully for us it’ll be a chance to get our feet back under us and get back to winning ways after a couple of tough defeats in the last couple of weeks.”

“I know everyone’s been up for the game this week and Fab’s been really getting on us and making sure we’re keyed in on the things we need to do to get back on a winning run.”

“I think a couple of their players were at the same Scottish camp last Christmas before this year’s Commonwealth Games and I have been coached by their coach a couple of times before up in Scotland. I guess that makes it for me a little bit more competitive and it’ll be nice to see some of the guys again.”

This is exactly the sort of game, perhaps, that the Eagles need after some tough losses and also the time of game where Matthew himself can make a claim for more BBL court minutes.

“I definitely know I can play at their level and it’s likely that I will get a few minutes in the game. But just like every game I’ve just got to be ready if Fab, Dave or Ian calls my name I’ll be looking forward to getting on the court and showing what I can do.”

“My loyalties obviously lie with the Eagles even being an honorary Scot in the English team’s ranks I’m looking to get the bragging rights over them and help us get the win we need.”

Matthew though was keen to praise the system that has seen The Kings bring so many players through to senior level to represent their club and in many ways their country too.

“Talking with Coach Nicol last year he talks very proudly of the Club he’s developed there and it seems like quite a professional set-up. They do have a very established development pathway and have had quite a few Scottish internationals go through their ranks from junior level to senior.”

“It shows that there’s definitely an opportunity for younger players in Scotland even though it’s not that well known for it’s basketball to move up to that hierarchy.”

Back to tonight’s game and a final thought from Matthew about the game and in particular his own team.

“We’ll pay them every respect but we need to come together and have a game where we can have concentrate on ourselves. Fab has been saying that we need to focus on what we do and not worry too much about the other team.”

“Of course, we’ve prepared for them but we need to get back to basics and we’ve been working a lot this week on our defensive principles and getting back to playing defence the way the Eagles are known for. This is a great chance to establish that in this game and prepare ourselves for what lies ahead.”