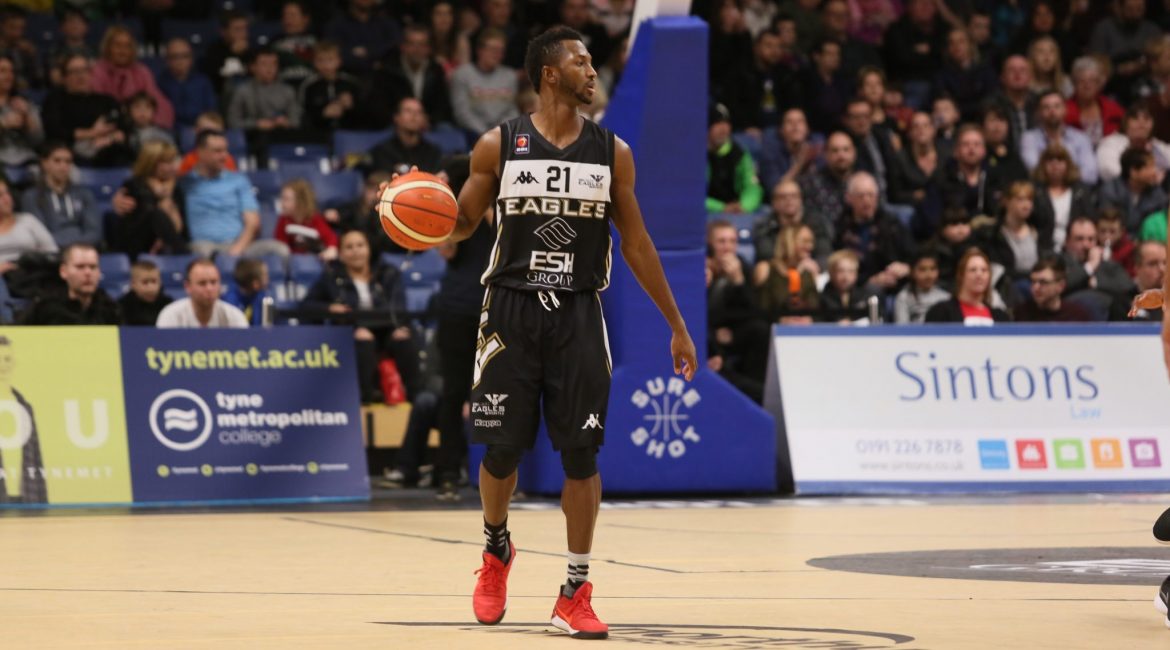 As the Esh Group Eagles Newcastle prepare for tonight’s crucial BBL Championship clash against Bristol Flyers, they do so in the knowledge that Captain Darius Defoe may well be missing again through injury, writes Jeff King.

If, indeed, Defoe doesn’t make it, the Eagles will once again turn to veteran guard Drew Lasker to lead the side as he did a week ago in splendid style to defeat Plymouth Raiders. That win and performance certainly pleased Lasker.

“I was very pleased personally. I thought it was a great overall team performance and although we still made a lot of mistakes I did think we were moving in the right direction. Having six guys in double-figures, I can’t remember the last time our scoring was spread out so evenly.”

“Just the whole vibe of the team was great, and everything was positive and it’s great for us moving forward.”

Not only was Lasker the Captain on the night he was also restored to the starting five as Head Coach Fab Flournoy shook things up leaving top-scorer Jaysean Paige and Danish International Zarko Jukic on the bench, at least at the start.

“It’s funny I didn’t even know I was Captain until I looked at the stats sheet after the game! Plus, I didn’t even find out I was starting until about 20 minutes before the game so neither really figured in my mind-set for the game.”

“I just went through my normal routine and did what I always do, and I guess I just was introduced to the game a bit earlier than I am normally. Once I knew I was starting I just wanted to set the tone for the team defensively and just lock in early.”

Lasker may not have lit the score-board up in terms of points, but he certainly turned a few heads as his athleticism and determination saw the 6’ 2” Texan soar above many a taller player and pull down an incredible 14 rebounds.

“One thing I can do and have always been able to do as a guard is work hard on rebounds. That’s something I have in my back pocket. With not having Defoe in the line-up we lose a little bit of athleticism and rebounding ability.”

“For me being in the starting five I had to have the thought that I needed to rebound more, and I wasn’t expecting to pull 14 down I guess that was what was required and it just kind of happened for me.”

Looking at tonight’s opponents Bristol, Lasker enthused over Flyers’ coach Andreas Kapoulas a man he’s trained under this season at England training and a man he hopes to be playing for in the forthcoming Commonwealth Games on Australia’s Gold Coast.

“Seeing how Bristol play as they are relentless, never give up and are never out of the game no matter what the score is it now makes more sense to me having worked under Andreas at England camp.”

“He’s a really detailed coach, he’s really intense. He’s always teaching and always coaching, and you can see it emphasised throughout the Bristol team. He is a big reflection of their identity.”

“They are always well-organised and always well-drilled and that’s a credit to Andreas and his coaching style. Sometimes as a coach you never know whether you’re going to get through to your players, but he definitely has put his stamp on that team.”

“That’s one thing that we’re going to have to be wary of because we’ve often struggled this season when we’re up to put opponents away and with this Bristol side we know they’ll play for the full forty minutes so we have to match that.”

“Bristol have shown and its factual that they are a better team than Plymouth who we beat last week. It’s been like a staircase in the last few weeks with the level of opposition going up. First it was Leeds then Plymouth and now it’s Bristol and that’s another step up.”

“With Bristol you know you’re going to get the effort but on top of that they have real talent as well. So, the big question for us is we now we can combat effort, but can we combat effort and talent?”

“So, for me, that’s our challenge tonight. Can we match Bristol both for effort and talent and if we can then we give ourselves a great chance to keep our run going?”