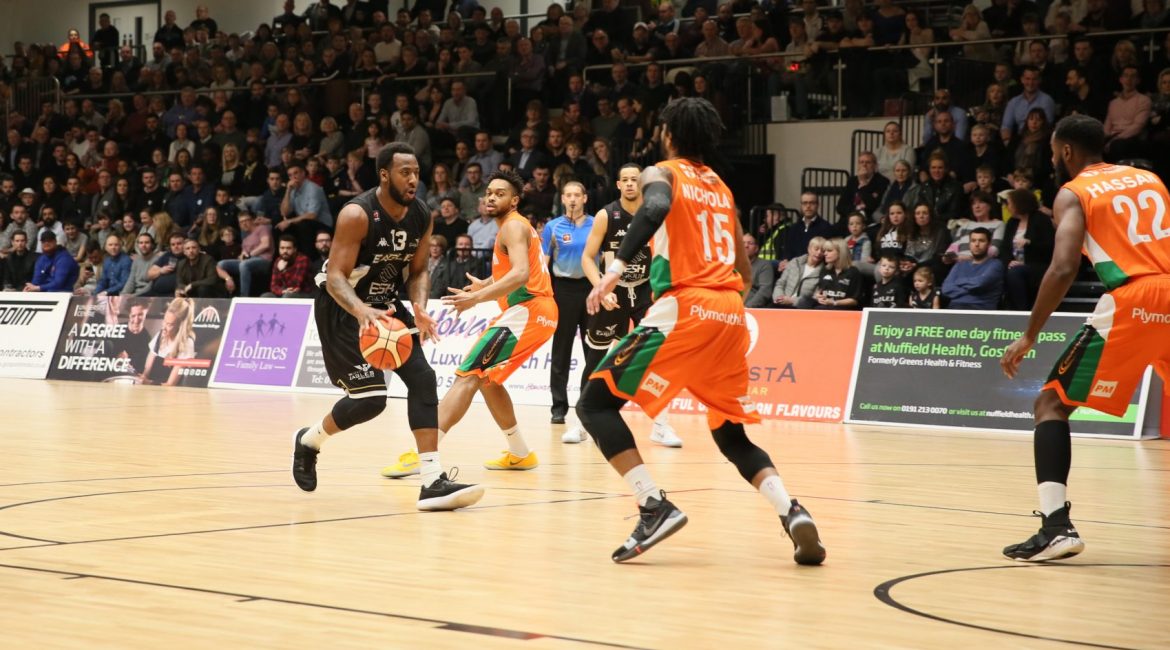 At the final buzzer on Friday night, party-poopers Plymouth Raiders had spoiled the celebrations of Esh Group Eagles Newcastle by taking a deserved 91 – 86 victory on the opening night of the brand-new Eagles Community Arena.

An Arena over 12 years in the planning and dreams of husband and wife duo Paul and Sam Blake, Managing Director of the Eagles and Chief Executive Officer of the Eagles Community Foundation respectively, was opened to a glorious fanfare and appreciative sighs of wonderment from Eagles fans.

Indeed, all who were present in the Arena on Friday night were thrilled with what they saw whether they were from Newcastle or Plymouth or simply neutral. The Eagles have laid down yet another marker in their fabulous franchise history and opened a new chapter in their storied history.

So, it was somewhat fitting that the first basket of the new era was despatched by non-other than veteran forward Darius Defoe. The adopted Geordie from London first arrived on Tyneside as a teenager back in 2004 and has been with his Club ever since, this being his 15th season as an Eagle.

He talked after the game of the experience and delight of being able to play in front of a sell-out crowd at what is now The Eagles very own home court and building.

“It was a shame we couldn’t do what we wanted to do and get the win but it is fantastic to see and play in the new arena and I almost don’t know what to say right now. I’ve been here since they first started talking about having our won Arena to finally playing in it. It is really fantastic.”

It was quite ironic, indeed almost prophetic and definitely fitting that it would be Defoe who would net the very first professional competitive basket in his new home which was a thrill for the powerful forward.

“It felt great to score the first basket but at the end of the day on court it was just another game and we were just trying to get the win. So personally, it was a bit disappointing not to get the win in front of such great supporters and a packed crowd which was fantastic to see. I just hope everyone keeps coming back.”

The game was close all night and in reality, the Eagles did well to run the Raiders so close given that their season-long top scorer Victor Moses limped out of the game with a hamstring injury after less than two minutes on the clock. An injury that will certainly keep him out of this afternoon’s game at Surrey.

“Victor was a big miss and we needed everyone to step up but we just found it too hard to cover his absence for so long in the game. I think he will miss the game on Sunday at Surrey so we need again everybody to dig deep and cover his absence.”

“Surrey may be at the bottom end of the league but you can’t take anything for granted in this league. This year the whole league has improved so you have to be focused on every game and it doesn’t matter if Surrey are at the bottom, we can’t take them lightly we have to go there and win this game.”

Even with today’s game in mind and the importance of bouncing straight back to winning ways, Defoe couldn’t resist having one more reference to that historic opening game on Friday.

“It was fantastic. When I first walked in to the arena and I saw the crowd and the fans I was speechless. I just know the past players I’ve played with at The Eagles would have loved to have played in an arena like this and I’m so proud to be part of this now and for what the future holds in our own home.”