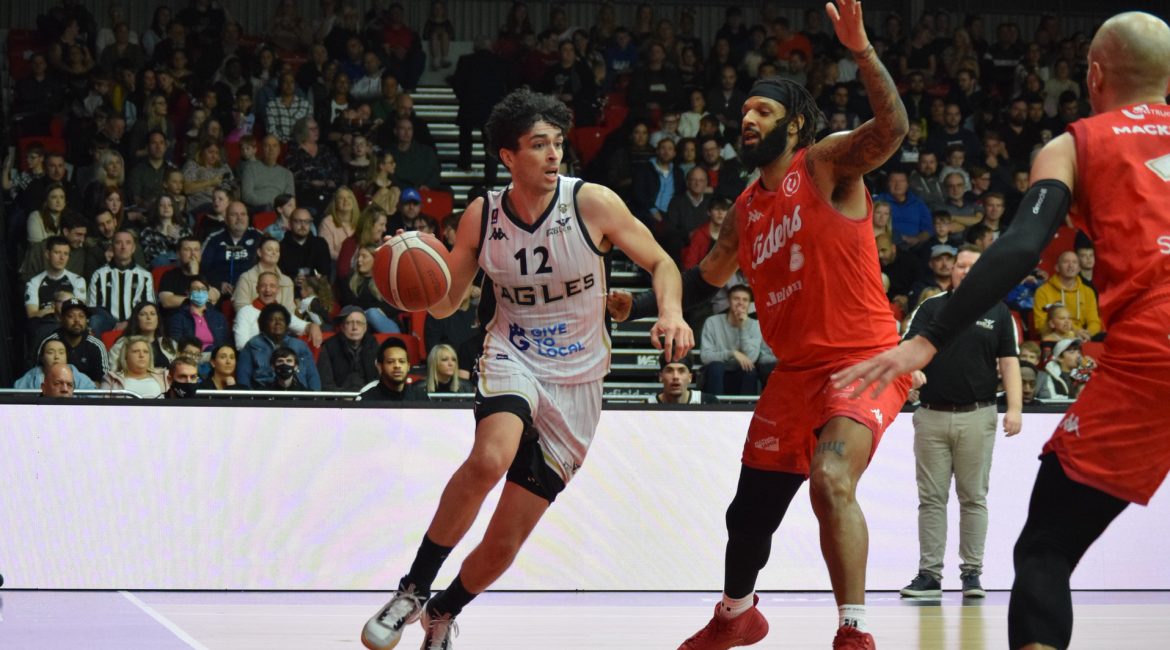 After a break of a fortnight the Newcastle Eagles go to Ponds Forge, Sheffield tonight to take on a Sharks team they’ve failed to beat in four previous outings this season, writes Jeff King. It’s the start of a run of four very tough looking fixtures that lie ahead for Newcastle.

There will be a visit to London Lions in midweek, a home game in front of the Sky Sports cameras against Champions-elect Leicester Riders and then The BBL Trophy Winners Cheshire Phoenix head to the Vertu Motors Arena.

They could be four games that define the Eagles season. But the old cliché of taking one game at a time will apply to a Newcastle side searching for a win to put the last two home defeats to Plymouth and Manchester out of their minds.

Explosive shooting guard Louis Sayers who is back in the rotation after injury commented on what he believes his teammates and he need to do in Sheffield tonight to get the ball rolling.

“Hopefully, we’ll do a lot of things differently. We’ve been struggling a little bit in recent games but the two-week break came at a good time. It’s been a bit of a blessing in disguise. We’ve been focusing on Sheffield for these last two weeks in practice and we’re looking to do things a lot differently.”

“Offensively we’ve been ok but it’s no secret that we’ve been struggling defensively. We’re just trying to find our identity again and defence has been our focus especially against Sheffield. I feel like we match up pretty well against them. But it’s going to be a challenge as they are quite a high-scoring team.”

It’s interesting that Sayers believes the Eagles match-up well against Sheffield given those four previous defeats but he believes they have the ability to turn that around tonight.

“Most of the time this season against Sheffield we’ve lost the rebound battle quite heavily. They’ve got rebounders everywhere especially from the guard positions so that’s one of the things we must focus on for this game.”

Sayers is an integral part of the Eagles rotation and there’s no doubt they missed him when he was out injured. He’s back though now and after another fortnight’s training he had a positive message to give.

“I’m fully fit now. It took me a few weeks to get ready but I’m definitely back to where I was and hopefully that can help us going forward.”

The Eagles have had a disappointing season but other than Leicester none of the other BBL teams have gotten away from them. So, whilst the League title may be out of their reach, a second-place finish and a good run in the play-offs is still in their sights.

“Apart from Leicester it is quite a tight league this season. It may not have been our best season so far by our standards but there’s still a lot to play for. We’ve definitely got our eyes set on some silverware yet and are still looking forward to the run-in.”

“Obviously, we want to put in a performance but I feel at this stage there’s no excuses and we definitely need to find a win whichever way we can do that. Our results haven’t been what we wanted but we’re making a conscious effort to remain confident and express that.”

“It’s easy to fall into a bit of a hole when you start losing games that we’re not supposed too. But we have to stay upbeat and confident otherwise we’re not going to help ourselves really.”

Honest words and a very fair assessment from Sayers who appreciates it’s about the players coming together and pushing on. Hopefully, that starts tonight although it won’t be easy against a Sheffield side that have been a tough opponent for Newcastle this season.

The game is live to watch for free with registration on the BBL Player with tip-off at 7:30pm.