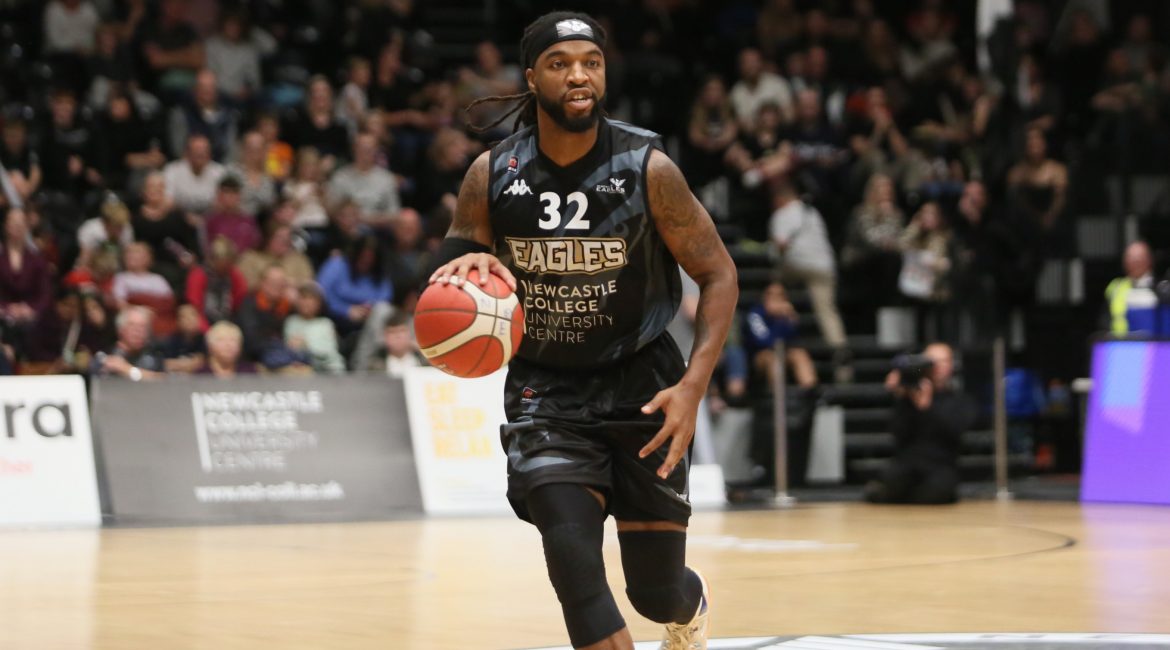 Donovan Johnson insists confidence is not a problem as Newcastle look to halt a six-game skid at Surrey Scorchers.

The BBL’s bottom two scrap it out for vital Championship points in the Eagles’ final fixture before Christmas.

“Honestly, we feel like we can win every game right now,” said the US star. “Surrey is no different.

“We all come in confident and it doesn’t matter who we’re playing. But the Scorchers game is winnable for sure.

“We just need to come out of the locker room with a little more energy and urgency and look to get on the fast break from the start.

“Our starts don’t have to be so technical — we just need to get up and down the court early and put pressure on the other guys from the tip-off.

“The slow starts frustrate all of us but we’ve got to work harder to put that right. Playing again this weekend gives us a great opportunity to fix things.”
Johnson could be forgiven for feeling he’s a marked man in the BBL this season after fouling out yet again in Friday’s heartbreaking defeat to Leicester.

A series of debatable calls down the stretch infuriated the homecourt faithful as Newcastle mounted a stirring comeback against the reigning champions.

And Johnson picked up two offensive fouls inside the final five minutes as the hosts sought to complete a shock win against all the odds.

“Picking up those fouls when I did was tough but it’s about managing what we can and staying focused on the next play,” he added.

“I want to play aggressively but it’s about finding the right balance.

“Late in the game, with those tic-tacks, we know the officials are going to tighten the whistle up.”

Head coach Steutel continues to analyse the calls affecting key players at key moments as he seeks to maximise the minutes of his game changers.

But the Newcastle playcaller sees no need to keep Johnson in check with the experienced forward enjoying his best form in an Eagles’ vest.

“Donovan’s energy and the way he approaches the game is fantastic,” said Steutel.

“He’s really trying to clean up the areas that are getting highlighted against him and he’s doing a good job of it.

“Donovan was instrumental to the way we played against the Riders and I’m extremely proud of the effort he put in.”

Johnson is averaging eight points and four rebounds per game after returning to the BBL with Newcastle.

And his contribution off the bench against Rob Paternostro’s Riders proved pivotal to a second half display that saw the hosts outscore their fierce rivals 45-35.

That Leicester clung on to claim a 91-87 win was down to another sloppy Eagles’ start and Johnson admitted: “It’s tough losing games in that way when you’ve fought back but we can’t keep starting slow.

“In the last three games we’ve had slow starts and we have to limit that. We need to start putting together four good quarters rather than three or three-and-a-half.

“We have to build on the positives and work on the negatives. That’s what we have to keep doing — we’re just grinding it out day by day.

“Staying together is the most important thing. We have agreed to hold each other a little more accountable every day, stick together through the tough times and push through.

“We lost by four against Leicester and we were down by 16 at one point so that shows how together we are right now.”

Fans can watch the game live in full on the BBL YouTube channel from 1pm.