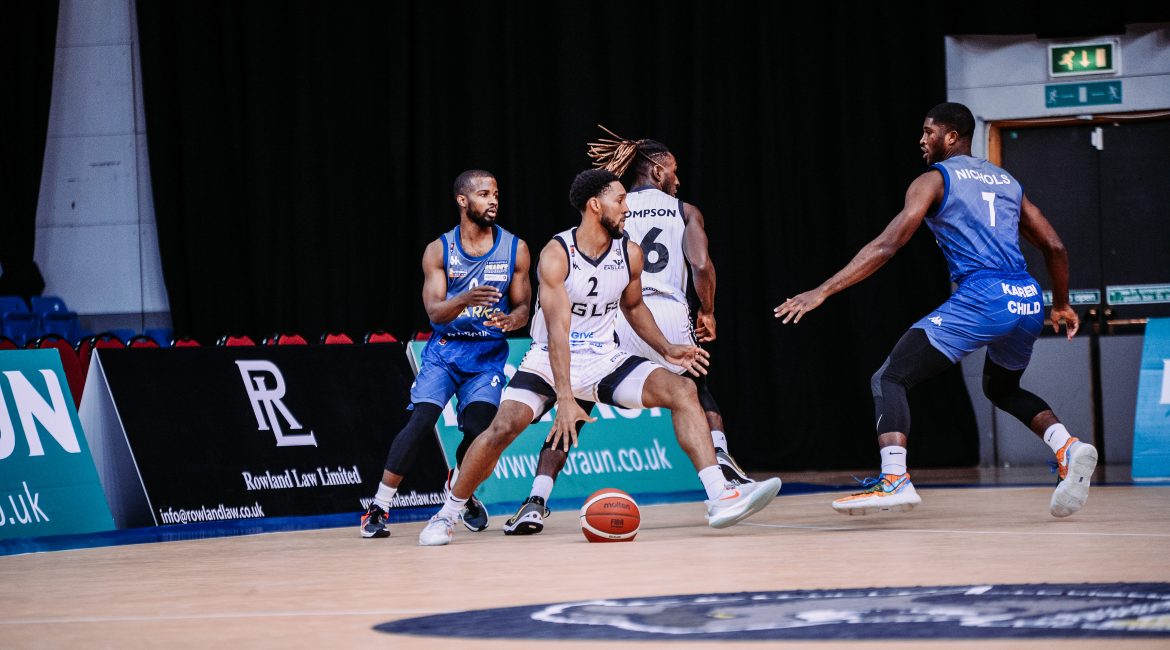 The expression, ‘if it wasn’t for bad luck, you’d have no luck at all,’ was never more appropriate on Friday night when Newcastle Eagles went down to an 85 – 64 defeat at Sheffield Sharks. It was a loss that seriously dents their hopes of qualifying for the next round of The BBL Cup.

With the COVID-19 protocols in place Newcastle went into the game without power forwards Darius Defoe and Duke Shelton as well as influential guard Louis Sayers. They were also without Head Coach Ian MacLeod and Assistant Jack Burgess.

They were struck a further cruel blow when explosive guard Kyle Williams and mercurial point guard and Captain Rahmon Fletcher both had to leave the game with injuries when the Eagles were poised to make a comeback.

It all meant that former Plymouth Raiders Head Coach Gary Stronach was on the side lines for the game calling the plays and even in defeat he took positives out of the game.

“You know the game. Things like this come along once in a while and we’re certainly up against it with what’s going on. But these games are here to be played and we’re learning all the time.”

“I thought we weathered their early storm and constantly re-grouped during time-outs. It’s great to have veteran players like Fletch on the floor. We were right in the game and when we took that one-point lead we felt good about ourselves and that we could close out the game.”

“Unfortunately, we got those two key injuries at bad times but I thought we still had the firepower. We played really tough for thirty minutes but down the stretch you could tell there was a lot of tired legs and tiredness leads to mistakes and with Sheffield being at full strength they took advantage.”

“The performances of Corey Johnson and Daniel Johnson-Thompson were individual positives without a doubt. I just thought that we never let up and never let our heads drop. The guys were encouraging each other and you could see they were there for the fight.”

“After the game we had a long talk and had messages from Coaches MacLeod and Burgess and I relayed that to the guys as well as the individual messages. As much as it was hurtful to lose there were positives there.”

“Defensively at times we were very alert and also on offence we moved the ball pretty well and played for each other. We have to take that forward and remember we’re going to be a lot tougher when we’re at full strength.”

“It’s good for the guys that are contributing. Wesley logged forty minutes along with Corey and Daniel played almost thirty-six when he’s only been averaging about five. That’ll do him really good and he’s got a really good future ahead of him.”

There’s no let up either for Newcastle who head to Glasgow this afternoon needing to win their last three games and hope results go their way in order to make it through to the quarter finals of a competition they won last season.

It will be a game-day decision as to whether Fletcher and Williams will be able to suit up and add their abilities to the roster for what Stronach knows is another tough game.

“Glasgow have released Elijah Minnie so they’ve made a change and we don’t know if they’ll have a replacement in for today or if they do who that’ll be. We’ll go with who we can. Games like this we can play loose and free as we have nothing to lose having a weakened team.”

“But we can’t make excuses. We’ll just go out tomorrow, have a game plan, stick to it, do what we have to do during the game and see how it goes. But whatever we’re looking to be back at full-strength by midweek and we’ll take things from their and assess the situation.”