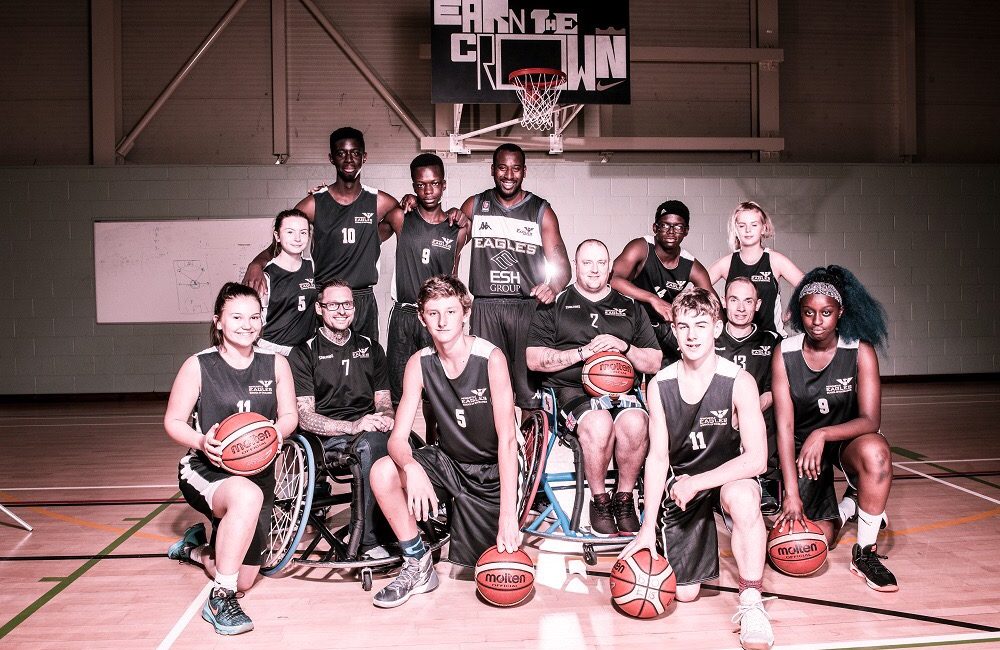 It’s not just the BBL Eagles that are preparing for the season ahead, our School of Excellence, which is the cornerstone of our Eagles Community Foundation, just launched their 12th season of competition.

This season the SoE to give it its abbreviated title will run teams at Under-18 women’s, Under-14 and Under-16 boys, Under-18 and Under-23 men’s. All coaches attended the launch and gave us their thoughts ahead of the season as well as some players to look out for.

“I’d like to think that our ‘big guy’ Leo Leperrier who has come from East Durham where he was last year to join us. He’s got a nice big frame, he can finish but he needs to finish around the rim a bit more. But he’s a big body who we’re looking forward to watching.”

“Kingsley Onyenekwe who was a training player last year with the Under-14’s had a good outing at Edinburgh in our pre-season game there. He’s a nice little flashy point guard, a pass first point guard, quick, plays defence very well.”

“But they all have potential as well as plenty to work on and it’s going to be great to work with them and help them develop.”

Moving up to the Under-16’s we have Sam Roxborough who is no stranger to the SoE set-up having been a player in the system, an assistant coach and now a Head Coach in his own right.

“Last year we had co-Head Coaches with Aaron and myself but this year Aaron’s got the 14’s and I’ve got the 16’s with Jay Hawman as my assistant who has also come through the SoE system and we’re really looking forward to it especially having come through the system.”

“It’s good to know what the players are going through and it’s great for me to work with them. It’s a career path not just for players but for coaches too. Graham Heath and his involvement with the SoE has been a great help to me and really pushes you on.”

“As a coach, you can still get a lot from it especially when you realise that you aren’t going to achieve what you’d have like to as a player. It’s a great opportunity to stay in the game and really improve your knowledge and too involved with a programme that has that pathway as well is massively important.”

“We’ve got a guy who’s become a real, real leader this year in Ben Proctor. He’s been in the programme for a couple of years now and his brother’s really tall and we think that growth spurt is going to come at some point.

Then there’s a younger guy Sam Mamuini who’s part of the North Regionals who we think is a real prospect especially coming through as he’s a year young so he’s definitely one to look at.”

Next up was Corrine Vaughan who bucks the trend slightly in that she’s a returning coach and once again will call the plays from the side-lines for the Under-18 Women’s team.

“I think it’s going to be a great year. We have nine players returning from last year and for a lot of them it’s their last year so we’re hoping that they can have a really good season building on the experience of last year.”

“First of we’re lucky enough to have a player that’s already in the England programme in Orieoma Chukwu-Etu who made the 17’s squad last year and she’s looking to make it again this year.”

“And we’ve got loads of girls that have done really well like Sally Mills who’s been in the programme since the Under-14’s and has never left it so it’s a great achievement for her to get to this level and I’m looking forward to working with them all this year.”

“It’s amazing to be Head Coach of The Eagles Under-18’s men. It’s a great opportunity and we have several challenges ahead but I think we’re up for it as we want to make our mark as an age group and make our make within The Premier North Division and we’re heading in the right direction.”

“I have four guys in particular to mention who will play an integral part both on and off the court and will be leaders. My vocal leaders on the floor are definitely going to be Riccardo Rizza and Theo Riley in terms of leading the team and understanding what we’re doing.”

“Off the court and on the court, I have two other very, very talented young men, Tosan Evbuonwan who got invited to the England camp last year and Chris Lindsay who was part of Luol Deng Camp and made it as one of the top 50 players in the country.”

“They’re going to be our go to guys this season not just on a talent level, not just on a playing the game level but also as setting the tone for intensity and understanding what we’re doing off the floor as well as on the floor.”

And last, by now means least, we have Graham Heath who has been involved with SoE as a Head Coach and administrator since its inception in 2006 and has been given the job of guiding the Under-23 Men’s team, a brand-new venture for The Eagles.

“For me it’s going to be exciting times working with players that have been in the programme and some of them have been out of the programme for a year and it’s a chance for them to build a bridge from under-18s to making Team Northumbria in Division 1 or even The BBL side.”

“It’s a chance for them to further develop themselves as players and people and to play senior basketball in Division 4 North with such a young team. Four of the team’s that made the Play-Offs are still in there.”

“I’m looking at some of their signings they’ve announced and we know it’s going to be a tough year but I think we’ve got a good team. It’s a massive, massive link that we needed.”

“You think of an 18-year-old coming out and then trying to compete with a 22-year-old who’s been to University and has had strength and conditioning for two or three years. That’s what these guys are going to get now.”

“I think for instance Themba Yabantu is a potential point guard for the future in The BBL. The kid has got so much athleticism and he’s got a very smart head for the game and is already training with the senior Eagles.”

“I think Alex Horta-Darrington could probably end up being a better play than his brother Danny who made the Eagles senior roster and obviously Aaron Wilson who is also training with the senior Eagles. If he keeps training hard, he’s a big body who could develop to the next step.

“Then there’s Ben Hogg who after this year will go to Newcastle University and play for their Division 1 side whilst he studies and I think he could be one for the BBL bench in the future.”

It’s great to hear all the coaches talking so positively about their roles, the community foundation, School of Excellence and some of their more storied players. One thing is certain with the coaches the SoE has in charge of their teams this season, there’s plenty of reason for optimism surrounding the sport of basketball in the North East.