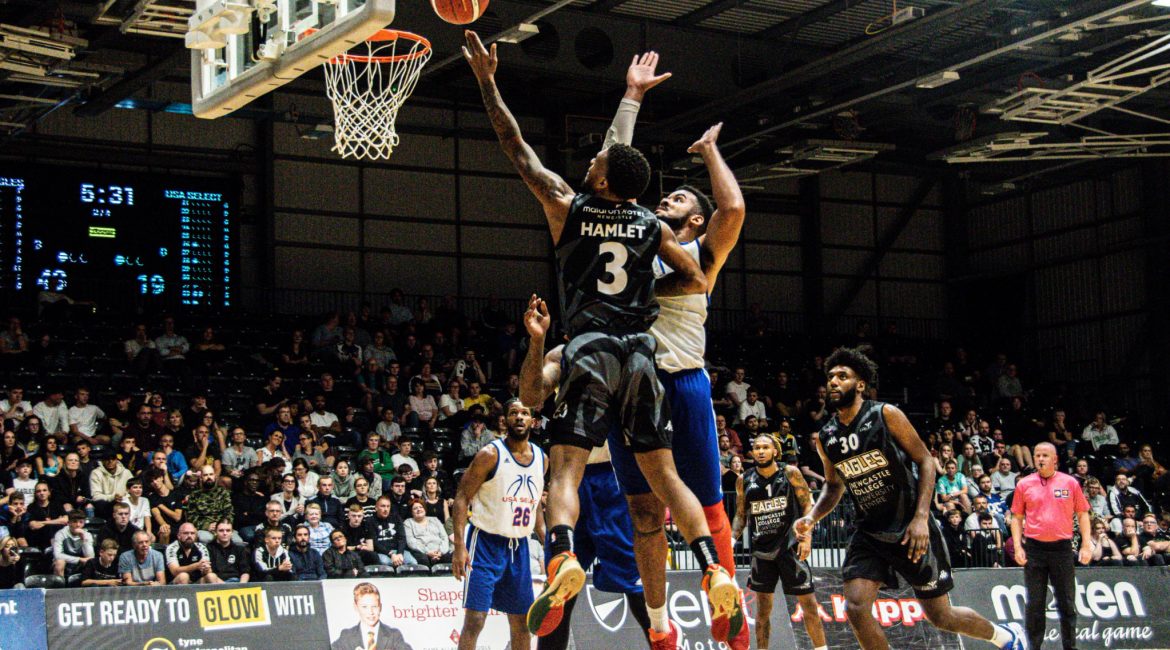 In stark contrast to Saturday night’s sobering defeat to Surrey Scorchers, the men in black jumped on their opponents from the start and never looked back.

Steutel was able to limit the minutes of his frontline BBL signings at the same time as running the rule over a slew of talented student stars.

And given that Rowell Graham-Bell is nursing a knee injury and recruitment is ongoing, an impressive and incident-free victory proved the perfect pick-me-up for a club in transition.

But the biggest surprise of the night came courtesy of Duke Shelton’s welcome return to the Vertu Motors Arena as a guest player.

The US forward saw his rookie BBL campaign come to a crushing halt in February when a freak foot injury ruled him out until the summer.

But Shelton is back on Tyneside and keen to top up his close-season fitness as he looks to find a new club.

The Duke slammed down a trademark dunk to fire the hosts 21-5 ahead and pile the pressure on Joe Crawford’s youthful USA Select.

Meanwhile, Newcastle’s new-look back-court pairing of Hamlet and McKissic — complemented by the canny Mockford — were bossing a one-sided clash.

Shelton was making the most of his unexpected star turn by causing chaos in the paint alongside the bullish Aughburns.

But Steutel had promised last night would be as much about the long-term future as it was his fast-gelling senior roster.

And with four minutes remaining in the first quarter the Eagles’ playcaller rang the changes — introducing five hungry wannabes keen to make their mark.

Fan favourite Sauveur Kande has already made a case for more BBL minutes but the forward was joined on court by Oliver Clingain, Temi George, Christian Alexander and Sam Mamuni.

And on the day the Eagles announced emerging talent in the region would feature as part of the BBL programme’s player pathway, home supporters were treated to an exciting glimpse of the future.

Josh Moore and Jordan May entered the fray moments later and the latter’s exquisite pass to Clingain for an and-one play brought Steutel’s bench to its feet.

Leading 32-13 after a fast-paced first quarter, Newcastle reverted to their starting five to tip off the second period.

And for a while it was the Hamlet-Aughburns show as the two new boys combined to light up the Vertu Motors Arena with some exhibition-style hoops.

Only big men Kohl Roberts and Rashas Faust were causing the Eagles any concern and, following Saturday’s below-par effort under the boards, Steutel will be looking for a more powerful showing in the paint against the Dolphins.

May, meanwhile, was enjoying his chance to mix it with USA Select’s wannabe pros and the busy guard dropped a brace of crowd-pleasing triples before the half-time buzzer.

The hosts took a 59-30 lead into the locker room but fit-again Shelton was only just getting started — a monster alley-oop from the outstanding Clingain’s cute pass extending Newcastle’s lead early in the third.

Roberts and Faust were on a mission to bully the Eagles’ young guns with the bruising duo frequently testing the patience of the pink-shirted officials.

But with the Duke delighting in leading his youthful troops, Steutel’s future fives battled hard and held their own to take an 80-44 lead into the final quarter.

And on a night when Newcastle’s playcaller was able to rest Darius Defoe and Jermel Kennedy, a convincing victory was the confidence-booster the home side needed heading into Friday’s night’s Norrkoping test.

Tickets for the pre-season games this Friday against the Dolphins and Saturday when the Sharks visit are on sale from the box office now.