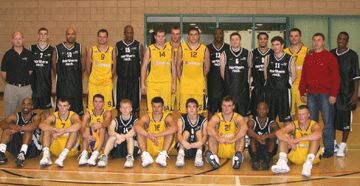 The Newcastle Eagles continued their pre-season build-up with a good performance to overturn their Lithuanian opponents at Westgate Centre for Sport last night. Coach Fab Flournoy will be pleased with this work-out and result against a tough and solid European team that provided spirited resistance throughout the 40 minutes.

The Eagles who had introduced point guard Reggie Jackson to their faithful fans at the previous game against Team USA Select unveiled another new signing in this game with former Chester Jet and ex-BBL MVP Trey Moore making his Newcastle bow.

And although it was the second quarter before the new guard got on the score sheet he went on to top score for his new team with 17-pts to show the firepower he can add to what is already an explosive Eagles line-up. All the Eagles players with the exception of Brian McCotter got on the score sheet during the game with a further four in double figures.

The Eagles took the first quarter 21 -12 but the determined visitors fought back in the 2nd and went to the locker rooms only down by 2 at 43 – 41. Then on the resumption of the game Meresta levelled the scores with the first basket of the second half.

However, Newcastle then turned on the style to stretch away and lead 81 – 57 with ten minutes to play. In the final period the lead increased to 94 – 67 and Flournoy took the opportunity to rest most of his senior players allowing the younger players to gain valuable court time. The fledgling Eagles found it tough and the Lithuanians were able to pull within 14-pts by the final buzzer at 99 – 85.

With ex-Houston Cougar Tafari “Tap” Toney still to arrive on Tyneside and be added to the Eagles line-up, there are encouraging signs that Flournoy has recruited well during the summer and that his Newcastle team will once again by genuine silverware contenders throughout the coming season.