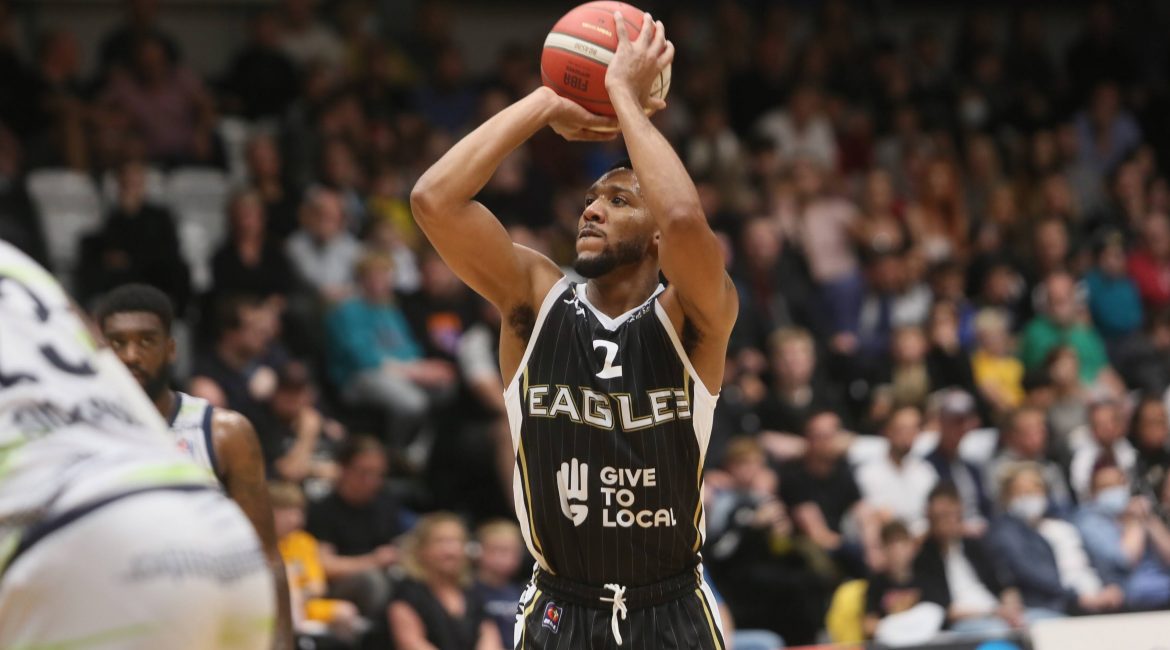 And the US sharpshooter believes the men in black have more than enough in their locker to throw the BBL Cup’s north group wide open this weekend.

Newcastle and Sheffield renew one of the league’s fiercest rivalries just a fortnight after the Sharks pipped the Eagles for a three-point win on Tyneside.

And Person Jr said: “I look at the teams we’ve played so far and there’s very little to choose between them.

“I’d imagine it’ll be another nailbiter on the Sharks’ homecourt but we didn’t play our best basketball against them last time out.

“We’ve got more to give and we could surprise them.

“I’m expecting a better performance from us compared to two weeks ago.

“I thought Sheffield’s attack was excellent last time out but they run a lot of the same type of offences as we do so we know what’s coming.

“We have to control the glass better than we did at the Vertu Motors Arena — that’s where they really killed us earlier this month.

“But if we handle the pressure and rebound the ball better then we can easily go there and get the win.”

Person Jr hauled himself off his sickbed last Friday to play a key role in kickstarting Newcastle’s season with 16 points against Cheshire Phoenix.

A statement 94-74 win meant the Eagles avoided equalling the second slowest start in franchise history and moved to 1-3 for the season.

And Person insisted he never hit the panic button on the back of three straight losses after revealing he’s been in far worse positions as a pro baller.

“I’ve been in teams that have endured slower starts than that,” he added.

“When I joined my club in Italy we started the A2 season with — I think it was — nine losses in our first 10 games.

“But we came back to win something like 14 of our last 16 matches and head into the playoffs as one of the form teams.

“So I’ve been in this situation before and I know from experience that it can take time before things settle down and teams discover their identities.

“I didn’t see our losing streak stretching our much further because we have experienced guys like Darius [Defoe] and Rahmon [Fletcher] to steady the ship.

“They both played exceptionally well against Cheshire and were the reason we were in a position to win that game.

“For Darius to come out like he did was massive for us. And Rahmon made sure that the rest of the guys were in the right rhythm.”

Person Jr is picking up his match fitness again after catching a bug that floored him for most of last week.

And he explained it was touch and go whether he’d even turn up at the Vertu Motors Arena for the Phoenix clash…let alone make the bench and shoot four from eight from three-point range.

“We’d played on the previous Sunday afternoon against Manchester and I woke up on the Monday with a fever,” he added.

“I didn’t feel well enough to practice so I called the coach.

“It got worse during the next two days and by Wednesday I didn’t think I had a chance of making the Cheshire game.

“I didn’t even think I’d be able to get out of bed at that point. I’d written it off in my own mind.

“But on Thursday it felt like there’d been a bit of a breakthrough so I decided to try and play on the Friday.

“I gave it a go and after coming off the bench I was a bit fatigued to start with. Coach asked me how I was feeling and I wasn’t great at that point.

“But then I got my second wind and I felt a lot better.”

Person Jr grew in confidence as the game wore on and his accuracy from beyond the arc gave the hosts invaluable breathing space at a key stage in the game.

“Friday night was the first time we put together a complete game,” he added. “In the previous matches teams had made a run on us and we just didn’t respond to that challenge.

“When it happened against the Phoenix we stayed strong and weathered the storm.

“We gave them our best punch and it was more than good enough.

“I knew we were capable of a performance and a result like that. But I also knew it would take a little time to put everything together.

“Finally seeing that we can close out a game has given everyone a huge confidence boost.”

Newcastle’s BBL Cup tie at Sheffield will be streamed live and for free on the BBL Player.