One Down, Four To Go For The Title

Newcastle Eagles/News/One Down, Four To Go For The Title 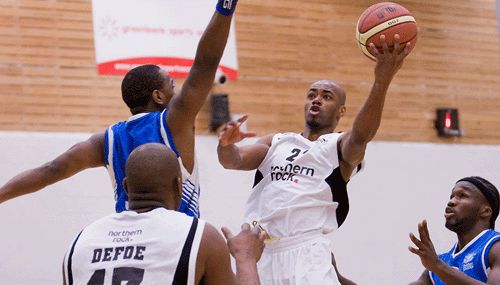 Newcastle Eagles kept up the pressure on the Sheffield Sharks at the top of the BBL Championship table thanks to a somewhat comfortable 77-91 victory over the Everton Tigers at the Greenbank Academy on Bank Holiday Monday afternoon.

The first quarter saw both teams try to stamp their authority on the game but it was the visitors who made the first move as they lead 17-24 at the end of the opening period.

The second quarter continued in much the same vain as the first with both sides trading baskets in the early going as the Eagles led 22-31 with seven minutes left in the half. The Tigers got themselves back into the game thanks a 10-1 burst to tie the game up at 32-32, but seven points from Eagles player/coach Fab Flournoy helped the visitors take a slender three-point advantage at 36-39 heading into the locker rooms at the half.

In the second half the Eagles enjoyed a 9-2 tear to take the score out to 38-48 midway through the third period. The home side fought their way back into the game and closed to within five points at 50-55, but eight points from Reggie Jackson to close out the third period sent the Eagles into the final stanza leading 54-63.

In the final period the Eagles broke the game open thanks to a 12-2 burst to take the score out to their biggest lead of the game at 61-81 with six minutes remaining. The Tigers valiantly tried to get themselves back into the game and despite a 10-2 burst to bring them back to within 12 points at 77-89, the Eagles secured the comfortable victory.

Olu Babalola led the Everton scorers with 20 points, while Charles Smith enjoyed a successful day as he lead the scoring for the Eagles with 20 points while Jackson chipped in with 19 points of his own for the victors.