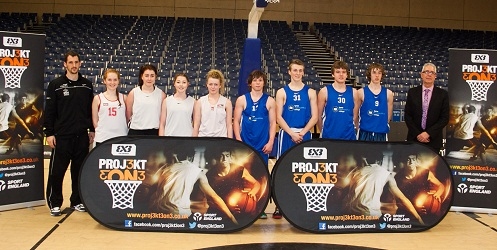 The Newcastle Eagles hosted their regional Proj3kt 3 on 3 Regional Tournament on Friday 15th February. The tournament was the pre match event before the Eagles BBL game vs Cheshire Phoenix. Small tournament had taken place over the preceding 2 weeks at more than 10 sites. From these smaller tournaments the winners progressed to the Regional Tournament which took place at the University of Northumbria, Sport Central.
After round robin games in the three age groups the finals got under way. Tynemet College Under 20 women lost out to the Eagle’s Women team.

Tynemet College had a strong presence in all of the finals with their two teams fighting it out in the Under 18 men category Tynemet Blue were eventually crowned Champions. Tynemet also took part in the Under 20 age group but Northumbria University’s North Stars disposed of the team to earn their place in the Under 20 Finals. Injured Newcastle Eagles player Damon Huffman was on hand along with Gary Atyes, chief operating officer for the BBL Foundation, to congratulate the winning teams. The following sites were represented in the tournament Tynemet College, Northumbria University, Newcastle College, Heaton Manor, Gateshead College, Walbottle Campus, Walker Tech, Cardinal Hume, Ashington, and Hexham.

“Proj3kt 3on3 just keeps getting better and better. First came the opportunity to access more turn up and play basketball sessions, this was followed by competition in the local centres, the opportunity to progress to a regional tournament on the home court of the Newcastle Eagles before they tip off a BBL match and finally the winners progressing to a National tournament” Eagles Community Foundation General Manager Deirdre Hayes explained. “The programme offers opportunities for players to get involved and stay involved in a great sporting opportunity which did not exist 5 months ago.”

Throughout March Proj3kt 3 on 3 and the Newcastle Eagles will have session continuing to run in the local area. To find out more about a session near you go to www.proj3kt3on3.co.uk