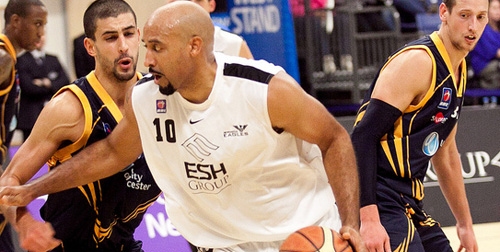 Reigning champions Newcastle Eagles showed their class to ease past Manchester Giants in the north-east.

The experienced trio of Charles Smith, Darius Defoe and Joe Chapman led the scoring for the home team as they cruised to a 96-76 victory.

Newcastle wasted no time in asserting themselves in the first quarter as some excellent offensive play saw them lead 23-7.

Giants worked hard to limit their losses and by the end of the period had trimmed the gap slightly to 25-12.

The visitors reduced the deficit to 29-20 midway through the second quarter before Eagles gradually moved away to a half time advantage of 46-32.

Defoe and Kareem Maddox both had 13 points for the hosts at the interval.

Eagles effectively put the game to bed in the third quarter as they stretched out to a 20 point lead (62-42) on Smith’s bucket.

Smith’s two at 76-50 was their high point before a two free throws from Ben Eaves and one from Nathan Schall made it 76-53 heading into the final stanza.

There was no way back for the Giants but they did end the match the stronger with an 11-0 burst after Eagles had posted a game high mark of 96-65.