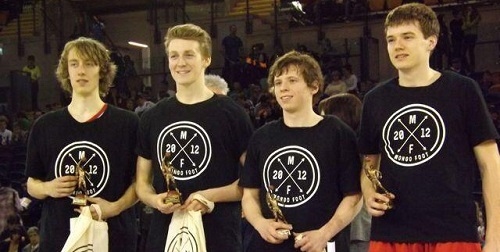 The BBL Foundation National Proj3ct 3 on 3 came to an end with the National Finals taking place prior to the BBL Trophy Finals in Glasgow on the weekend. Unfortunately the Newcastle Eagles were not on hand having been knocked out of the trophy during the quarter final stage.

After travelling to Glasgow on the 8th March the teams got into action early at the Emirates Arena. The Under 20 Women did exceptionally well especially as Bethany Rumble and Sophie Ridley are both on the Eagles School of Excellence Under 16 team. They were joined by Amy Ridley from the under 18 team. Playing against much older players the team just missed out on reaching the finals which went down to points difference.

The Under 20’s went 2 wins and 2 losses just missing out on the finals. The decider was when they went down 6 – 8 to Leicester B’s who earned the final sport in the finals.

It was down to the Under 18’s to stop Leicester from lifting all of the trophies on the day. After going undefeated in their group games the team ran out 21 – 11 winners in the final to ensure the team representing the Eagles brought a trophy back to the Northeast.