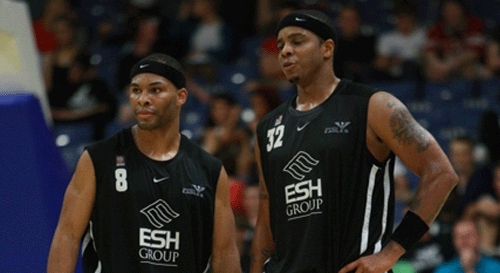 The Newcastle Eagles showed their championship credentials once more as they dug themselves out of a hole to beat local rivals the Durham Wildcats 94-101. The Eagles have now won six games in a row and are still yet to lose on the road in the BBL Championship this season, while the Wildcats have lost thirteen games on the bounce, stretching back to their home win of 5 November.

But that form wasn’t evident on the night as the Eagles relied on a fourth quarter surge from Joe Chapman to win the game. He and Charles Smith led their scoring with 26 points each, while Mike Capocci led all scorers with 27 for the hosts.

The Eagles started and ended the game well, and raced into an early lead at 6-12 behind 7 Andrew Thomson points; but were soon pegged back as the hosts responded with a 9-3 burst to tie the game at 15 on Paul Elderkin’s three-pointer. Smith and Capocci traded triples inside the final minute of the first quarter, before Chapman’s bucket ended the scoring at 22-25 to the Eagles.

The Wildcats scored the first 6 points of the second quarter, including 4 more for Capocci, to take a lead at 28-25. Andrew Bridge’s ‘and one’ play tied the game, but the Wildcats managed to keep their noses in front, thanks in part to three-pointers from Elderkin and Ralph Bucci, despite Charles Smith tying the game at 39 on a three-pointer and Chapman doing so at 45 inside the final minute of the half. But Mario Flaherty dunked the ball with 15 seconds remaining to emphatically send the Wildcats into the locker room at 47-45.

And it was in that vein in which they continued as they pushed on after the break with an early 6-2 run to lead 55-49 on Flaherty’s basket while a Capocci triple made it 58-51. The margin stayed around there until, within the final three minutes of the period, another Capocci three and a Chris Pearce basket made it double-digits at 70-60. That forced the Eagles into a game-changing timeout and, crucially, they came out of that to narrow the deficit to 75-70 going into the fourth period.

The Eagles carried that momentum into the fourth quarter as they outscored their hosts 17-7 over the opening five minutes behind 10 points from Joe Chapman. And they never looked back from there as a Chapman triple and Paul Gause’s basket gave them a double-figure lead of their own at 84-95 with two minutes to play, meaning the game had seen a 21-point swing in the space of ten minutes.