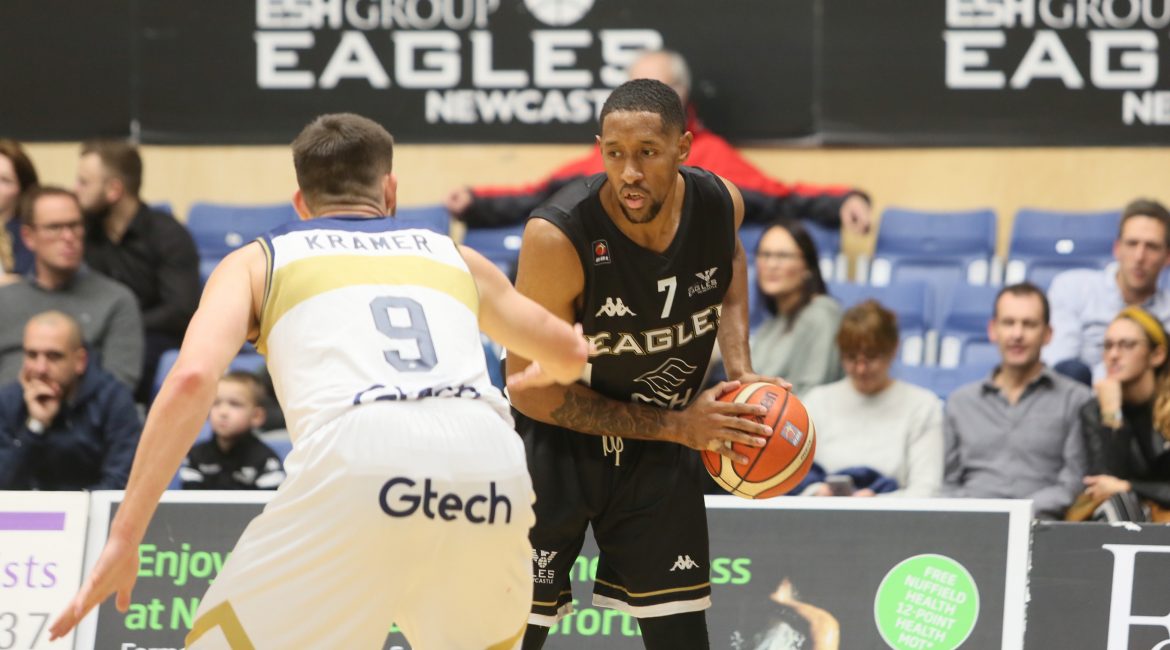 Esh Group Eagles Newcastle needed Friday’s 97 – 89 win at home against Worcester Wolves to put them back on track after the previous weekend’s double reversal at the hands of Leicester and Bristol.

It was a timely boost as the Eagles face some tough up and coming games in both The BBL Championship and Cup and needed to restore confidence and faith in to their play and system after losing their previous 100% record.

In what was a tight and keenly fought contest Newcastle overcame a resilient Wolves side that never went away throughout 40 pulsating minutes despite the visitor’s bottom of the table position. For the hosts they needed a hero to lead them to the promised land. That man was Victor Moses.

The USA power forward put in a sublime individual performance netting 31 points, grabbing 15 rebounds and blocking 4 shots to lead his side to the hard-fought victory and he was in happy mode when discussing the game after the final buzzer.

“It was good to get back on a winning track today. I think the key was our defensive rebounding. We’ve been getting out-rebounded the last couple of games we lost so we had to key-in on that as one of the adjustments we needed and did a good job of that.”

Moses definitely played a huge part in that rebounding effort and these days seems like an almost automatic double-double (points/rebounds) showing why the Eagles brought him to Newcastle. He was just as key on the offensive end turning rebounds in to key scores to help his side.

“I saw that a lot of our shots were short and I had to come and make a few plays and fortunately they fell in to my hands. But it was not just me, it was a good all-round team effort. Jeremy (Smith) is a great player and he’s always going to give us a spark whether it’s off the bench or starting and Darius (Defoe) is a BBL veteran and you know what to expect from him as he’s done it for years.”

Smith was terrific having 27 points in just over 25 minutes on court whilst Defoe relishing his new role this season coming off the bench was once again in double-figures and played a huge role defensively to stave off the hungry Wolves.

Eagles also had to play the entire final quarter without stand-out point guard Rahmon Fletcher who normally guides the side on court after the playmaker tweaked a hamstring late in the third period forcing him out of the game. That’s when Moses really stepped up and found spots to punish Worcester.

“I’m getting used to playing with all of these guys. So, whether someone comes out of the game injured somebody always seems to fill in and is ready to play and I’ve just got to adjust to that. It was a hard-working week in practice and I think that wok paid off tonight.”

Newcastle can now rest up for a week as their next game is at home against Cheshire Phoenix next Friday night at Sport Central who they beat in the season’s opener 70 – 65 back in September, followed by a Cup quarter-final the next day down in Leicester which is a massive game.

“It was kind of slow start when we played Cheshire last time out but we’ve improved so I think we’ll be ready for them and it’ll be a lot better this time around. Hopefully can get a win that will take us in to the Leicester game with a boost.”