More Live BBL On The BBC

The BBC has unveiled plans to broadcast even more British Basketball League games along with over 30 additional sports or sporting events in an attempt to “reinvent free-to-air sports broadcasting”.

In total over 1,000 extra hours of live sport a year will be made available live via iPlayer and the BBC Sport website.

BBC director general Tony Hall said: “We’re giving people more of what they love by working in partnership with the sports industry and making the most of digital technology. This shows how we’re reinventing the BBC for a new generation.”

“This partnership is just a further stepping stone in the success and development of basketball in the UK.”

Barbara Slater, head of BBC Sport, added: “We’ve seen the nation get behind by a whole host of sports in recent years, especially at major events.

“We want to use BBC Sport’s live streaming service to showcase more of those moments that inspire people to take part.” 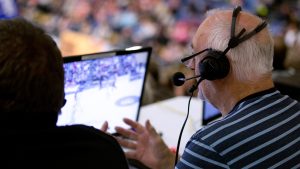 Coverage of the BBL begins on BBC Sport with an existing commitment to 23 live games from December, including the showpiece finals of the Cup and Trophy rounding-off with the 2018 Play-Offs Final in May.

Eagles fans can already watch all our games, both home and away, with subscription at LiveBasketball.tv and this season one selected BBL game a week is also being broadcast live on UNILAD via Facebook.