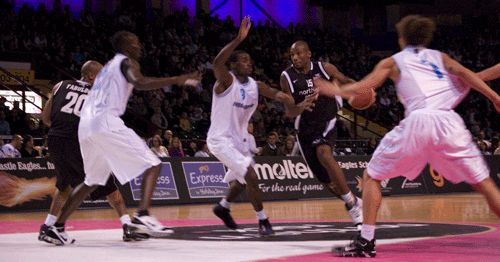 Three-time BBL All-Star Lynard Stewart, of the league-leading Newcastle Eagles, has won the Molten Player of the Month award for March.

The 6’8” centre has had a startling month and has recorded double-doubles (points and rebounds) in his last five games, culminating in 18 points and 16 rebounds against the Marshall MK Lions last Friday.

In their BBL Championship games over the month, he averaged 19 points and 10.4 rebounds per game, but most amazingly he has shot 78.7% from the field as the team have gone 6-1 in the league with a chance to secure their second league title in three years this weekend.

Disappointingly for the 31-year-old Pennsylvanian, the Eagles started the month with a BBL Trophy Final defeat to the Guildford Heat. However, he managed 26 points and 6 rebounds in that game.

By winning the accolade, Stewart has continued the dominance of big-men in the 2007/08 Molten Player of the Month award. Only one guard, Jayson Obazuaye in January, has won it this season.