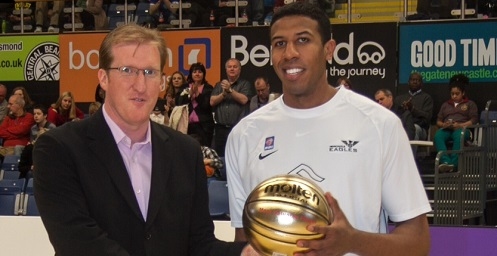 The BBL coaches have voted for their various Molten BBL Teams of the Year, with 2012-13 Molten Player of the Year Drew Sullivan leading the way.

He is joined in the prestigious BBL Team of the Year by his Riders’ team-mate Jay Cousinard, who was the MVP of the 2013 BBL Cup Final. Also making the line-up is Travis Holmes, who has been on fire for Surrey Heat for most of the campaign, even though he was a late replacement and also briefly returned to the States mid-season.

The frontcourt sees a space for Matt Schneck of Marjon Plymouth Raiders, who has been outstandingly consistent throughout the year, whilst BBL rookie Kareem Maddox also gets a spot after tearing it up in the paint for Newcastle Eagles.

The trio of Sullivan, Couisnard and Maddox also make the Molten BBL Defensive Team of the Year. And, they are joined by a third Riders player in the shape of Zaire Taylor, underlining the imperious defence which has been the cornerstone of a terrific year for the Leicester club. Chavis Holmes of Surrey Heat has some of the quickest hands in the BBL and that cements his berth.

The final line-up, also voted for by the BBL coaches, is the Molten BBL British Team of the Year. Unsurprisingly, it’s a hat-trick for Drew Sullivan who is the first name on the list. He is joined once again by a Riders’ colleague, this time forward Anthony Rowe who has made a huge difference to the team since his switch from Raiders. Also in the starting five are all-action Surrey Heat forward Sam Cricelli, BBL rookie and Londoner Orlan Jackman, as well as Sharks’ forward Mike Tuck.

Molten BBL Team of the Year: