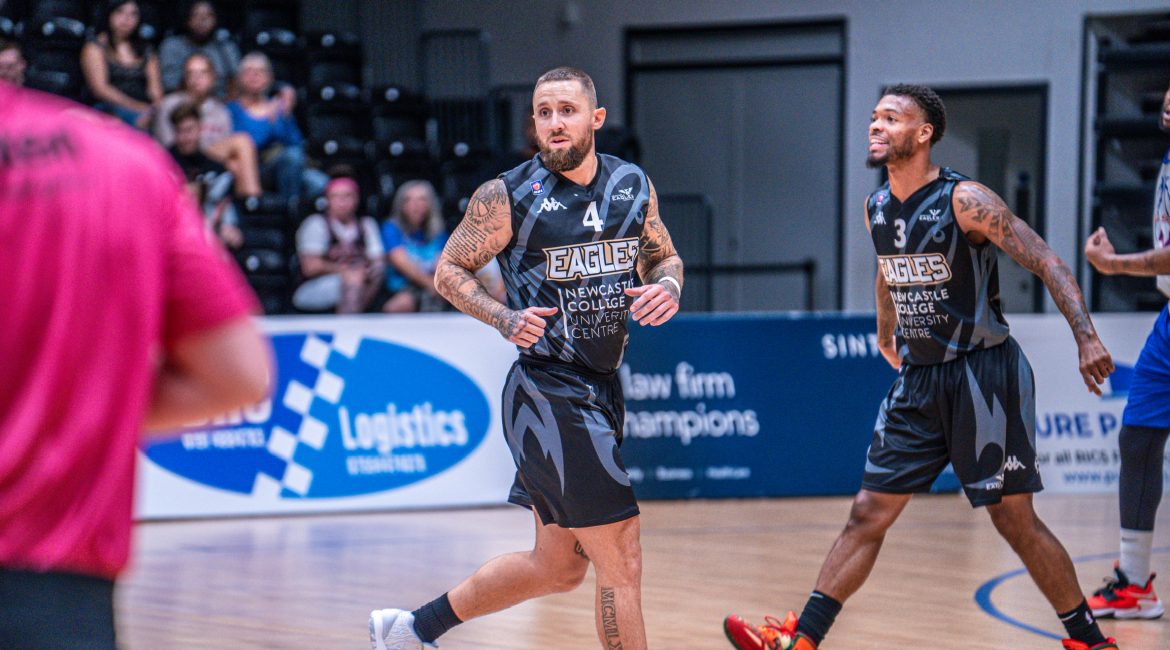 Ben Mockford can’t wait to make up for lost time as Newcastle Eagles belatedly join the BBL party on Friday.

Marc Steutel’s men were restricted to the practice court while their top flight rivals got stuck into Championship action last weekend.

But Mockford and co. get the ball rolling in 48 hours when Rahmon Fletcher’s Manchester Giants rock up at the Vertu Motors Arena.

“There’s been a lot of positives in the last few weeks,” said the experienced Great Britain guard.

“Negatives too — but they’re all learning experiences.

“I think we’ve had some encouraging games in pre-season. The first match against Surrey was good and then we performed well against Norrkoping and USA Select.

“We had two slightly down games as well but we’ve learned a lot from those and we just have to tweak some things.

“We need to see how the new guys fit together, who plays well with who and things like that.

“But I think we’re in good hands with Marc and we’ll figure things out.

“Right now I just can’t wait to get back on court and play in the BBL as a Newcastle Eagle.”

Mockford feels a franchise in transition could benefit from a free weekend as coach Steutel beds in this month’s new signings and plots how to limit Fletcher’s productivity.

“Obviously we’ve still got some moving pieces so it gives us some more hours to get under our belts and play together and gel,” he added.

“Plus we get to see some of the competition play before we play them. The more time we have now the better for us.”

Mockford missed the start of pre-season as he was granted a few days’ rest following his stint with the GB national team.

Nate Reinking’s men failed to win a game at Eurobasket but Newcastle’s new recruit insisted he loved spending time with his international team-mates — in spite of the results.

“It was tough and it was also very disappointing,” added Mockford.

“In the lead-up to Eurobasket we were very strong. We beat a lot of big countries, winning 11 out of 13 games but then obviously Eurobasket is extremely tough.

“Being the summer, a lot of countries had EuroLeague and NBA guys available.

“We still fancied our chances but it didn’t go our way. Although it was ultimately a tough summer I love playing with those guys in the national team.”

Mockford and Steutel have forged a strong partnership during FIBA’s international windows and the former was quick to commit to Tyneside this summer.

“For me Newcastle has the best fan base and it’s one of the toughest places to play as an opposition player,” he added.

“The supporters really do help us on the court so I can’t wait to get out and play in front of them competitively as an Eagle.

“So far everything has been great. Everything’s been very professional but I knew it would be coming in.

“You hear about clubs, different teams and it’s always positive stuff when it comes to the Eagles because they do things the right way.

“Everything’s been great on and off the court.”

Limited tickets are remaining for this Friday night’s tip-off against Manchester Giants on the box office.