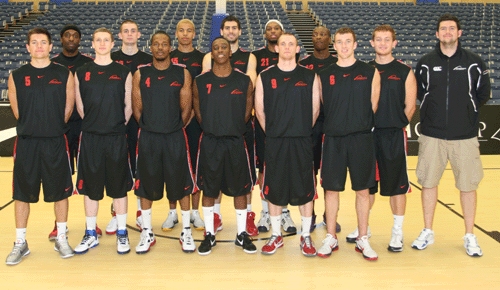 Marc Steutel reinforced his claim that league points are the priority this season after Team Northumbria’s Jekyll and Hyde weekend.
The Sport Central club tipped off their EBL Division Two campaign with a thumping 80-43 win against Derbyshire Arrows.

But less than 24 hours later the Arrows gained revenge with a 79-76 pool win in the Patrons Cup – ending TN’s involvement in the competition.

“The league is our priority,” said Steutel. “The cup would have been a nice addition but it doesn’t influence league promotion.

“The lads were a bit down after the loss but we’ll get back to training and focus on a big league match at Mansfield this weekend.”

TN already look like title challengers with a new-look squad quite capable of firing on all cylinders.

French import Ivan Emanuely has caught the eye of Newcastle Eagles’ chairman Paul Blake and the club’s coaching staff with his all-action style.

And summer signing Siman Stewart poured in a total of 28 points against the Arrows to underline his importance to a young roster.

With last season’s MVP Toby Hutton easing himself back into action following a four-week lay-off Steutel has options ahead of the trip to Mansfield.

And the former TN forward feels silverware is possible if TN can retain their focus moving forward.

“As a young side we sometimes take our eye off the ball,” he added.

“We had a good game plan in Saturday’s match against Derbyshire and we managed to stick to it.

“A day later and we just weren’t as focused in the cup match.”

TN went into their final Patrons Cup pool game with a 2-1 record following victories against London United and Birmingham Mets.

But a narrow defeat at Steutel’s former club Team Solent meant the Arrows clash was a must-win fixture.

TN had chances to snatch victory from the jaws of defeat down the stretch with Emanuely, Stewart and fellow new boy Jack Thomspon finishing strongly.

But Steutel added: “We didn’t shoot very well on Sunday.

“We did manage to bring down their top scorer, who only managed to score four points.

“But by focusing on closing him down we let their secondary players score.”

TN are still without TyneMet product and Eagles bench player Ross Wilson as the teenage forward struggles to overcome a knee injury.

But one of the North East’s most exciting prospects is working around the clock to guarantee a return to action next month.