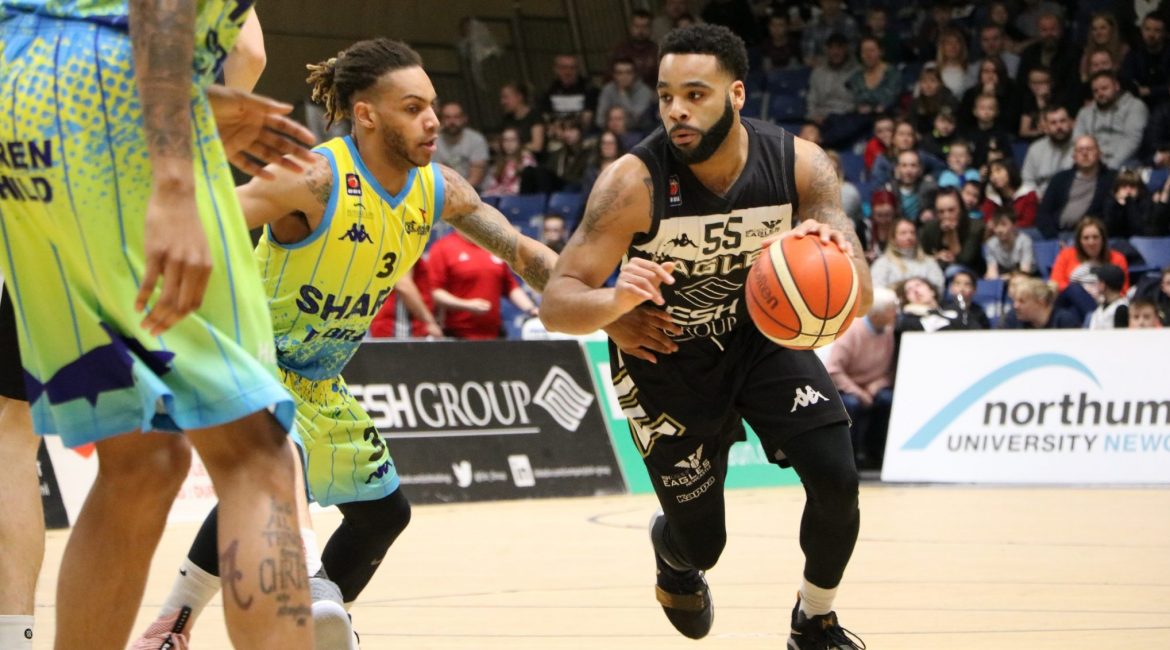 The Esh Group Eagles Newcastle will spend the week licking their wounds and looking to get some players back and up to full fitness after Friday’s crushing defeat down at Worcester, writes Jeff King.

The Eagles lost by 87 – 65 at Worcester in a lack-lustre performance and went down rather easily at the hands of a play-off bound rival. However, there were extenuating circumstances that whilst not offering a full excuse did play in to the Wolves hands.

Already without Drew Lasker who’s still in Australia with the England Basketball team at the Commonwealth Games, they also had to go in to the game without their talisman and The BBL’s leading scorer, Jaysean Paige.

Paige who’s averaging 23 points a game this season was perhaps the one player that the Eagles really didn’t need to lose at this stage of the season. Being that additional player down meant that Head Coach Fab Flournoy and long-time veteran forward Darius Defoe were forced in to returns to action before they were fully ready.

Both, as always, gave their all but it was easy to see that they were somewhat below full fitness and unable to assist their team-mates as the Wolves went hunting for the win that they got to strengthen their play-off bid.

Flournoy’s side are of course all ready in the play-offs and have been for some time. The aim for them was to finish as high as possible to secure the best placing and position for the end of season games.

That second place now looks severely under threat but in truth, they should at the very least secure third and still give themselves a good run at the final piece of BBL silverware this season.

Prior to the Wolves defeat, Paige who knew he wasn’t travelling due to his sprained ankle he picked up in training.

“I turned my ankle over in training and it’s swollen up and needs rest and the chance to recover. A long bus trip would not have helped it and although I wanted to be with the guys I must look at the bigger picture and make sure I’m ready for the play-offs”

It’s good news for all at Newcastle Basketball to hear that Paige shouldn’t be out too long and that he’s in defiant mood.

“To be honest I know it’ll be tough at Worcester without me,” as it proved, “but I’m not worried where we finish in the league. Once we knew we couldn’t win the league our focus was making sure we’re ready for the play-offs.”

“We’ve beaten all the teams in the league including Leicester and I’m confident that if we’re fit and healthy and in the right frame of mind we can beat them all again. We just have to get together and make sure we’re focused and ready.”

“Leicester have done well. They’re a deep and well coached team and deserved to win the league. But we know we can beat them. We did that when we were all fit and in the other to games against them it could have easily gone our way.”

“If we come up against them or anyone else I still feel we’re good enough and talented enough to beat them all and that’s what we’re focused on.”

The Eagles have four games left in the regular season. Manchester and Plymouth from the lower reaches of the BBL must visit Northumbria University Sport Central and Newcastle will expect to win those two games.

The away games are tougher with visits to Glasgow and Surrey still on the schedule both venues the Eagles have lost at on their last visits. They would possibly need to win one or even both to sneak second place, but two home wins will confirm a third-place finish.

“We’ll keep going, stay together and make sure we’re ready for what’s to come. It’s all about those play-offs now and that’s what we’re focused on and looking forward too.”