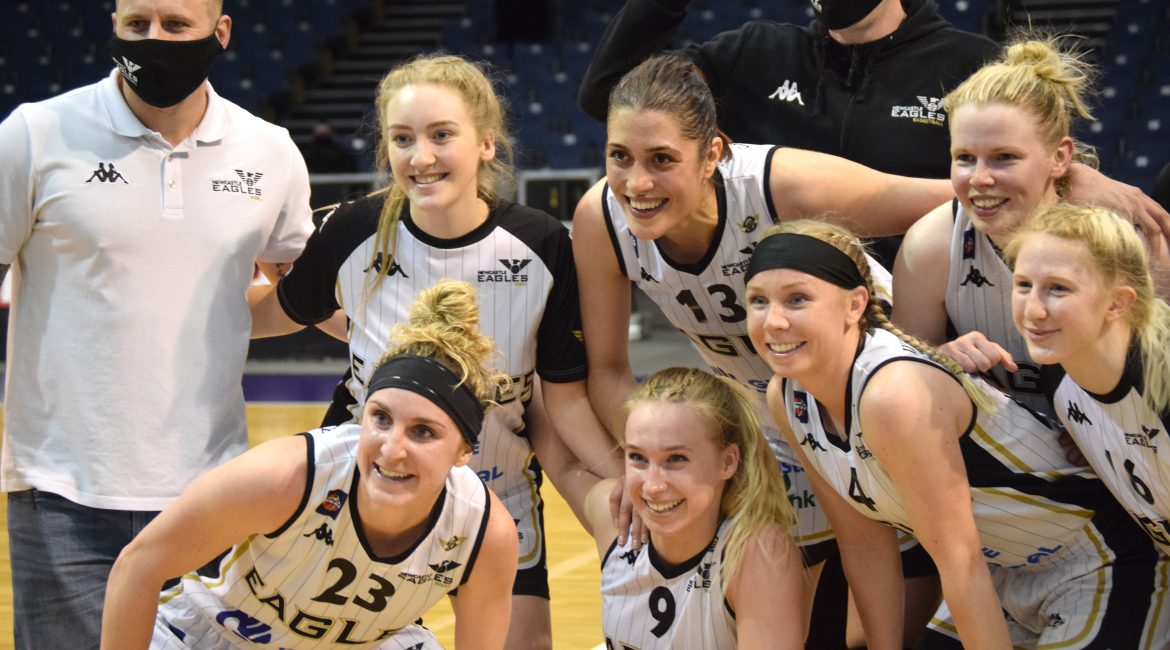 Newcastle Eagles will ride the emotional high of this month’s magical May Madness and look to wrap up a sensational Cinderella story with a smile on their faces.

That’s the promise from captain Ali Gorrell as the women in black look to make it a hat-trick of huge WBBL upsets in this afternoon’s Play-Offs final.

Underdogs Newcastle face London Lions in the final fixture of the season having knocked out league winners Sevenoaks Suns and runners-up Leicester Riders.

And Gorrell revealed the soaring Eagles have no intention of coming back down to earth after writing their names in sporting folklore.

“People ask us if we’re able to refocus and get over the high of the last two wins,” she said. “But we don’t want to!

“We’re going to ride that high all the way into the final and maintain the momentum that’s turned our season around.

“We’ve been super relaxed and had a whole lot of fun during the playoffs and we just don’t want it to end.

“We’ve watched the other teams in the post-season and they’ve looked so serious — like every game is just business for them.

“I guess as favourites you’re expected to win and that’s how you have to play it.

“But as underdogs we’ve been let loose and allowed to play without any pressure or expectation.

“Everyone’s got a huge smile on their faces and we’re loving our basketball right now.”

Never in the history of the WBBL has a team knocked off both of the top two seeds to make the Playoff final.

Incredibly, Newcastle only just scraped into the top eight after starting their league season with just one win in 10.

But the Eagles have come alive this month after Gorrell promised the unfancied Tynesiders would bring the chaos to May Madness.

“I guess some people might even have us down as favourites for the final after we knocked out Leicester and Sevenoaks,” she added.

“And I know we’re favourites in terms of fans from across the country rooting for the underdog.

“But let’s face it — London should win this final with ease when you look at the talent they have and their strength in depth.”

Gorrell and her team-mates know the pressure is on the third-placed Lions to put an end to Newcastle’s dream of a fairytale finish to a remarkable season.

But head coach Chris Bunten admitted the dynamic has changed within the space of a fantastic fortnight.

“First of all, nobody expected us to make the playoffs in the first place,” said the man who led Team Northumbria to Playoff final glory in 2016.

“And when we did get there nobody — including me — expected us to get any further!

“It’s been an incredible journey and it’s a fantastic achievement for this team to make the final.

“But we don’t want to get this far and leave it at that. We’re in this final to win it.

“All week we’ve been working towards striking the right balance between chasing the win and doing it with a smile on our faces.

“I don’t want my players to feel any pressure. But I want them to feel like the winners that they are.”

By rights Newcastle should be nowhere near this afternoon’s final after losing an entire starting five during the regular season.

Bunten negotiated the quarter-final and semi-final using a six-player rotation as the league’s smallest team sneaked past the Suns and the Riders.

And one of those ‘super six’ headed into the season with little expectation of making it off the bench.

Rising star Millie Oates has gone from relative unknown to key player within the space of four months and the guard said:

“There were 15 players here last summer but we were down to even or eight at the end of the season.

“It’s been a tough transition but now I love it when Chris looks down the bench and points to me.

“I just want to do my best for the club and my team-mates and I want to enjoy the final.”

Bunten has been boosted by the return of Newcastle University student Ori Chukwu-Etu this weekend after the guard was cleared to play following a head injury last month.

But the short-handed Eagles still have it all to do against a stacked London roster if they are to write the final chapter in their Cinderella story live on Sky Sports from 3pm.