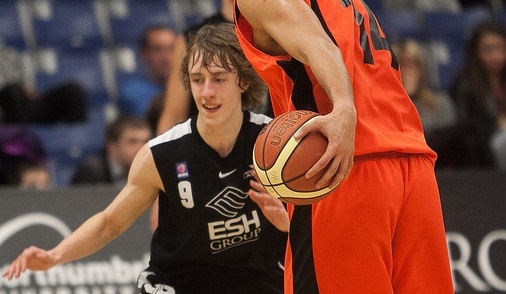 The Euroleague Basketball social corporate responsibility initiative One Team and the BBL Foundation are to join forces at the Final Four Fan Zone in Trafalgar Square to promote the work that the two organisations carry out and promote the power of basketball as a tool to integrate communities in the United Kingdom.

The partnership will centre around the promotion of the BBL’s recent Proj3kt 3on3 programme, in partnership with Sport England, which uses the 3on3 version of basketball to increase participation amongst the 16-19 years age group and to promote social inclusion in areas of the UK where there are BBL franchises.

The action will take place in the Turkish Airlines central court of the Final Four Fan Zone on Saturday 11th May, where there will be an Under 18 men’s Proj3kt 3on3 invitational tournament featuring BBL clubs including London Lions, Leicester Riders and Newcastle Eagles plus a number of London-based basketball teams.

Eagles winning Proj3kt 3On3 team including Eagles senior Eddie Matthew, Danny Horta, Andrew Green and Alan Slasor will be playing at the event this Saturday. A big thanks go to Tyne Met College, Benfield Motor Group and LA Taxis for providing travel support for the players.

Alongside the Under 18 men’s tournament there will be a demonstration of 3on3 basketball which will include stars from the GB squad, celebrities and MP’s to highlight the potential of the programme to both promote social inclusion and increase basketball participation in the UK.

One Team has grown into a very exciting sport and social development initiative since it was launched by Euroleague Basketball last year. It now has the support of 15 of Europe’s leading basketball clubs, a strategic partnership with Special Olympics and a further clubs collaboration as part of London’s hosting of the Turkish Airlines Euroleague Final Four.

Commenting on the partnership and Euroleague “One Team” initiative, Isabel Gultresa, Head of CSR for Euroleague said: “Sport is a hugely powerful tool for positive social change. One Team has allowed us to reach out in all the European communities where we have a Euroleague One Team programme going on. We are now looking forward to building our collaboration with the BBL Foundation over the next year as part of our legacy programme for the UK. We are building a number of key relationships as part of that legacy and are excited to be working with the custodians of basketball in the UK.”