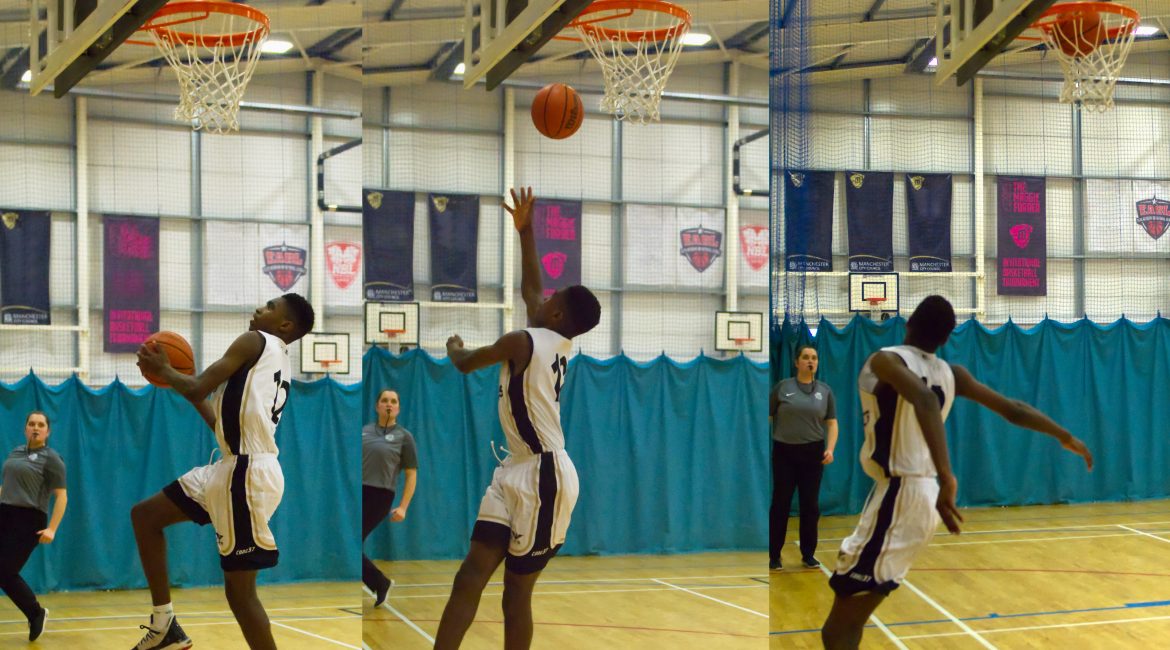 Newcastle Eagles Under 16 boys laid down a mighty marker after toppling Trafford Magic in Manchester.

A standout second quarter underpinned a stunning 85-77 road win as the Eagles executed a near perfect game plan.

And the Eagles are fast emerging as this season’s surprise package after picking up their most impressive win of the campaign.

A cagey start saw both teams remain scoreless for the opening three minutes.

But it wasn’t long before the Ollie Finlay-inspired visitors burst into life with Farrell Kepngang (pictured), Emmanuel Hezekiel and Joe Corkin all making key contributions.

And Magic had no answer to Newcastle’s total team basketball as the hosts went into the first quarter break 29-17 down.

Better was to come from the fired-up visitors as Tobi Dawson, Jonny Ajay and Pedro Omere joined the party during a superb second period.

But it was that man Finlay who added to his season’s highlight reel by beating three defenders and finishing for the and-one.

The Eagles led 49-32 at the half but Magic’s deep bench — coupled with the benefit of six training sessions a week — sparked a strong comeback.

The hosts had reduced the deficit to six down the stretch before Hezekiel, Corkin and Finlay closed out a deserved win.

And Newcastle headed home in confident mood after tipping off 2022 in fine style.

Sophie Hawkins paced an unstoppable Newcastle Eagles Under 14 girls side as the visitors dominated on their return to action following the festive break.

Ellen Totton’s side bossed Cheshire Wire from tip to buzzer on their way to an eye-catching 81-42 win.

And it seems the only way is up for a team determined to set the pace in 2022.

Newcastle took time to adjust the Wire’s wily screens and bagged the bulk of their first period points on the fast break after Grace Rae opened the scoring.

But once the Eagles got the measure of Cheshire’s defence the floodgates opened for the ambitious Tynesiders.

A 17-7 first quarter advantage became a 44-20 lead at the half with Lexie Cardwell’s confident full court approach proving a constant thorn in the Wire’s side.

A succession of jump balls evidenced the determination of both teams to retain possession at all costs.

But it was Newcastle who overcame a few defensive wobbles to stamp their authority on an entertaining clash.

The Eagles doubled down on defence after the restart to restrict the Wire to just four third period points — all from the free throw line.

And at the offensive end the visitors continued to keep the scoreboard ticking over with Hawkins and Lexie Walton doing the damage.

Cheshire restored some pride to level the final period 18-18 as Totton’s team tired.

But Newcastle can approach the second half of the season full of confidence after Hawkins (19), Rae (17) and Seraphine O’Neill (14) anchored an impressive offensive masterclass.