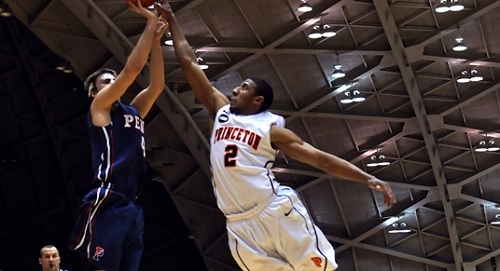 Newcastle Eagles are able to announce the signing of 6’8 power forward Kareem Maddox. The 23 year American will be starting his second professional season and will look to fill the role vacated by the departing Andrew Thomson.

Maddox played Division I college basketball for the Princeton Tigers of the Ivy League. In his senior season he was named the Ivy League Defensive Player of Year and also named to the All Ivy League 1st team. He was known in college as a versatile and unselfish player who was able to score, pass, rebound and block shots as his team required it. He led his team to the Ivy League Championship and the NCAA tournament where they were narrowly defeated by a powerful Kentucky team 59-57 on a layup by NBA star Brandon Knight at the buzzer. Maddox himself recorded 12 points, 4rebounds, 3 steals and 2 assists in the game.

Hailing from Oak Park, California, Maddox spent his first professional season playing for Landstede Zwolle of the Dutch Eredivisie. He averaged 10 points, 5 rebounds and 1.6 blocked shots in 23 minutes per game and shot a healthy 36% from the three point line and 75% from the foul line before suffering an injury in January which curtailed his season.

Maddox has a degree in English following his time at Princeton and was highly recommended by his team-mate at Landstede last year and new Eagles point guard, Damon Huffman.

Fab Flournoy said: “We are delighted to have signed Kareem. He is another who impressed us in our Christmas tournament last year and we feel that his size, athleticism and smartness will really fit well into our defensive scheme.. Its also nice to bring some more young legs into the team”!!

More signing announcements will follow shortly, alongside details for the Eagles pre-season tournament at Sport Central on the 10th and 11th September. Tickets for this event are now online at www.newcastle-eagles.com and a reduced price offer will be made available to season ticket holders at the end of the week.