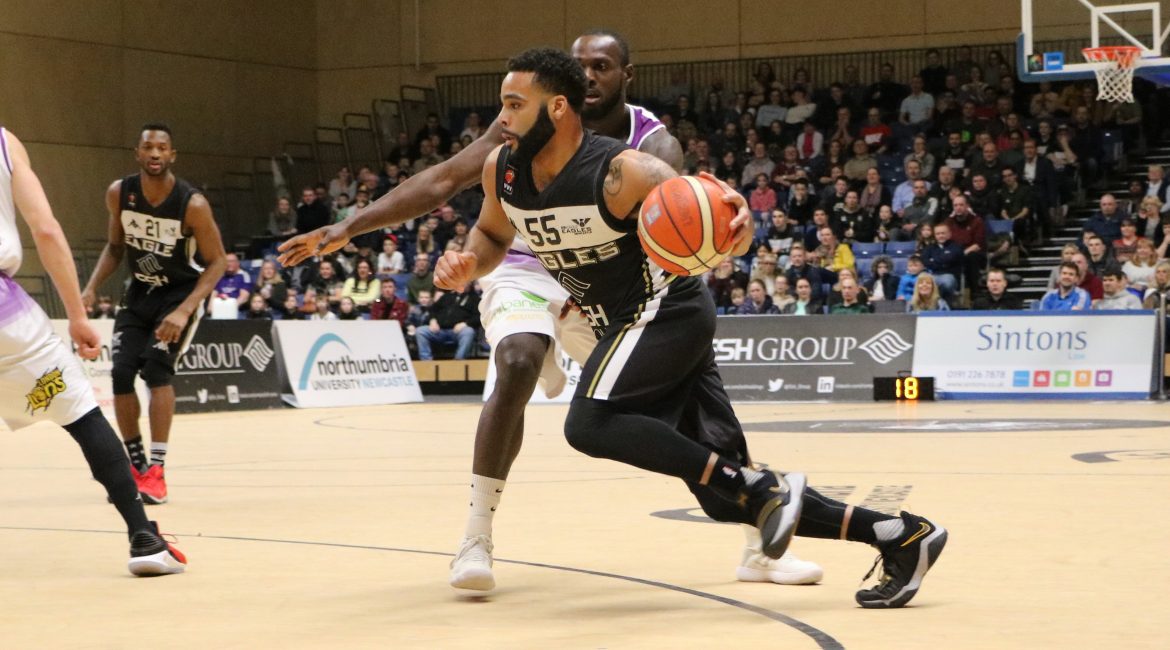 For the second home game in a row, Esh Group Eagles Newcastle went down to a damaging defeat. This time it was a Championship clash against a shorth-handed London Lions that proved their downfall, writes Jeff King.

The Lions came in to The Eagles Nest shorn of their best player and Captain, Justin Robinson as well as having other players missing from their roster due to other reasons. But, whether those absences seemed to galvanise the rest of their squad inspiring them to a surprise win.

The Eagles’ feathers were well and truly ruffled as they failed to take advantage of their injury-hit opposition and in going down 85 – 82 gave themselves a mountain to climb in their pursuit of a League Championship title.

It was a very frustrated and disappointed Drew Lasker who stood up after the game to try and explain the feelings of the team and himself as Newcastle crashed to another surprising loss. The veteran guard is in his fifth season as an Eagle and knows his sides efforts were unacceptable.

“It’s a tough one to swallow, there’s no sugar-coating that. That was a game we had in hand that we’re supposed to win especially being at home. There ain’t no excuses, no excuses at all we just weren’t good enough.”

The Eagles themselves were without the injured Terry Martin, but at Cheshire in their previous game when Martin picked up the injury they covered his absence comfortably. That night the squad stepped up but on Friday it failed to repeat that performance.

“I told the guys pre-game that it was time for us to beat up on a time for once as I feel that it’s been a while since we’ve done that and even with Terry out they were more short-handed than us and this was a perfect opportunity for us.”

“But, with the growing pains of this team we seem to have a habit of playing down to a level of whatever is in front of us and that’s an issue. When you play like that you get punished and that’s what happened, we got punished.”

“We let them hang around, gave them confidence early and they were free to make those big plays down the stretch. It’s us as a team that needs to address that, and we have to learn how to win together as a team.”

“You hope that the guys are taking it on board and with such a new group and making so many changes we just have to find a way to get it down but at the moment that’s not happening, and the result is we’re losing games we should be winning.”

At the half, Newcastle were three points up and whilst not comfortable looked like they could push on in the second half especially with their opposition in foul trouble. However, the home side failed to capitalise on that and Lions stayed out of further foul trouble which made a difference.

“Sometimes you prefer to play a team at full strength rather than one at half strength because they kind of have a nothing to lose mentality and it’s just natural that they have a “us against the world” attitude and naturally come together.”

“There just out there playing freely. That’s why you’ve got to put the away early ‘cos if you do they’ll die and not get that going. We did the opposite, started slowly giving them confidence and let them stick around so they were in the game and they closed the game out really well.”

But, almost inevitably in The BBL, there’s little time to ponder and recover as The Eagles go in to Manchester this afternoon to take on the second from bottom Giants in a game they’ll be heavily favoured to win. Lasker though knows Friday’s loss makes this game tougher.

“For us no game is a “gimme” game. I think its been evident all season and we can’t look at the standings. We’ve put ourselves in a hole now. Before Friday we controlled our own destiny. Now we’re going to have to win out and still rely on others to beat Leicester.”

“We have to control what we can control and that’s us and we have to be flawless from now in. The whole team not just some of us, all of us have to have that mind-set and mentality because if we don’t then we’ll see more results like Friday’s.”