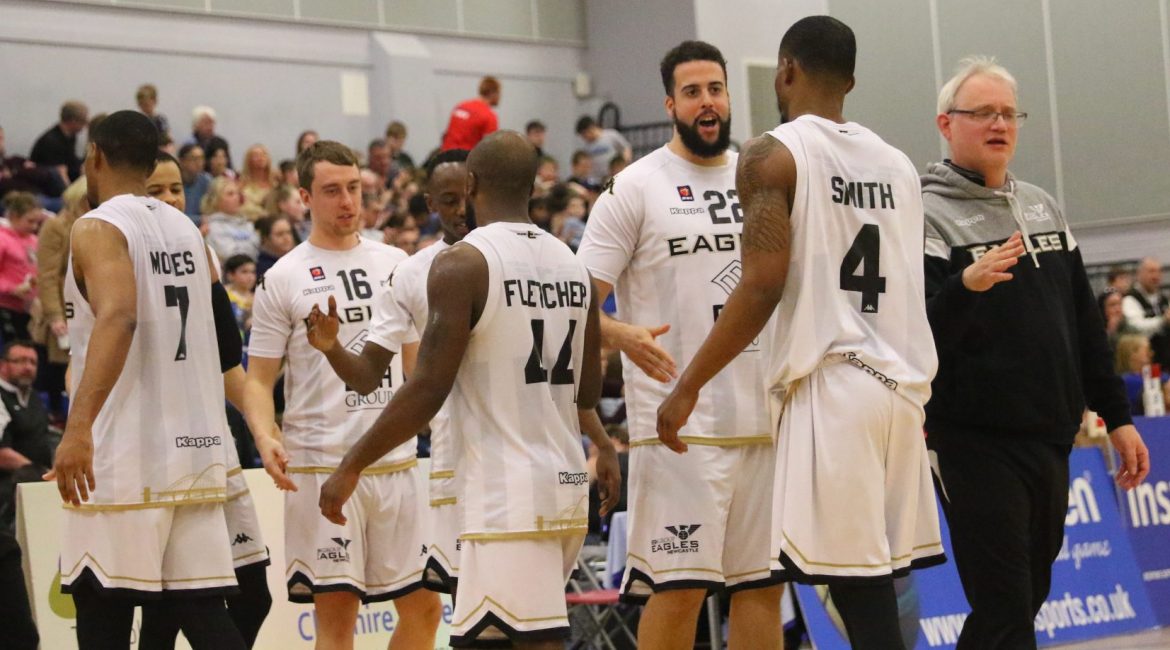 It was a great double-winning weekend last time out for Esh Group Eagles Newcastle and they’ll be looking for more of the same this coming weekend. Wins over Bristol at home and on the road at Cheshire consolidated the Eagles third place in the BBL Championship.

This weekend it’s back-to-back away games at Worcester on Friday and London City on Saturday so as starting forward Jamal Williams reflected, they need to take that form and confidence in to yet another crucial set of games.

“We were happy with the way it went. The coaching staff have emphasised that we have to be on point heading in to the end of the season with the play-offs on the horizon. So, I think for the most part we’re happy but obviously there’s things we can improve on but it was a really good weekend.”

“Especially heading in to this weekend’s double-header, which we haven’t played in a while. At least we had one day in between last weekend but this is real back-to-back. This one’s going to be tough as we’re playing two good teams.”

“Worcester is better than their record shows and then on Saturday against London City will be a big one with them right behind us in the league. But we have to concentrate on and take care of Worcester first. They have been a talented team all year they just haven’t found their groove as a team but they can.”

That they can will certainly be helped by having Coach Tony Garbelotto at the helm. The ex-Eagles play-caller came back to the BBL in February and his first game in charge was a 103 – 92 home loss to Newcastle. Since then Wolves have picked up two wins and are starting to look like a more cohesive unit.

“I think Tony (Garbelotto) getting them together and getting them to play a certain way seems to be making a difference and certainly makes them a tougher proposition. So, we need to concentrate on that one before thinking about the next one.”

Williams actually started the last two games allowing Darius Defoe to come in to the game from the bench and for now that system seems to be working for Newcastle.

“It’s something that the coaching staff have gone to at the moment and it worked in those two games. We could stick with it or we could change things up again. I think that’s one of the advantages of having a deep roster and everyone understanding their roles.”

Basketball as has been well documented down the years is a team sport and the team that plays together and plays for each other usually comes out on top. That’s always been the Eagles way but Williams did single out the 1-2 punch of Victor Moses and Rahmon Fletcher who were spectacular at the weekend.

“When games get tough and we need something to happen that’s who we have to play through. Obviously Fletch and Vic are a substantial piece of our armoury and how we go and how successful we can be.

“As long as we’re on point with them and playing through them and doing what the coaching staff want us to do, we can be successful as that is a very tough 1-2 combination for teams to play against when we all get that right.”

Two tough games then to come and both on the road but that’s the life of a professional basketball player in the UK and The BBL. Williams is not phased by the prospect nor does he feel his team-mates are.

“We’re looking forward to it and we’re feeling confident. Apart from the loss at Leicester we’ve got a pretty good rhythm going and concentrating on playing one game at a time and building up our best basketball for play-off time.”