KD Is All Star MVP

Newcastle Eagles/News/KD Is All Star MVP 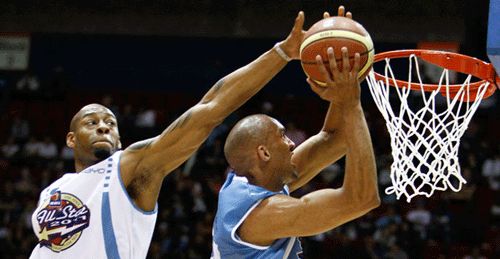 The high flying Kadiri Richard stole the show during the BBL All Star Game at the NIA in Birmingham but the Eagles ace admitted to having mixed feelings despite being crowned MVP.

Having won the BBL Dunk Contest on his last visit to the National Indoor Arena earlier this year, Richard was again on top form, this time showcasing his full skill-set with a superb near triple-double of 14 points, 11 rebounds and 9 assists to help the Rest of the World to an exciting 119-115 victory over a BBL Great Britain select team.

Clutching his golden MVP ball, Richard admitted that while he had thoroughly enjoyed the perfect warm-up to the main event, it couldn’t make up for the disappointment of not featuring with the Eagles in the 2011 BBL Play Off Final.

“It was a lot of fun playing out there with the guys and it really was amazing just how close the camaraderie was after such a long and intensely competitive season.”

“There was a lot of friendship amongst the players but it was still very competitive.”

“I guess it was nice for me come back to the NIA and perform again after winning the dunk contest before the BBL Cup but I would rather be playing in the Final.”

“It was a tough season for us at Newcastle with those key injuries and it’s sad we aren’t playing in the last game of the season.”

“However I really do think that we did everything we possibly could in the circumstances to make it but we just ran out of gas.”

Richard wasn’t the only player to shine for the Rest of the World with Jelson Homes DMU Leicester Riders guard Ryan Zamroz claiming 20 points while the BBL also waved goodbye to veteran Tony Windless who recently announced his retirement as he left on a high note with four triples.