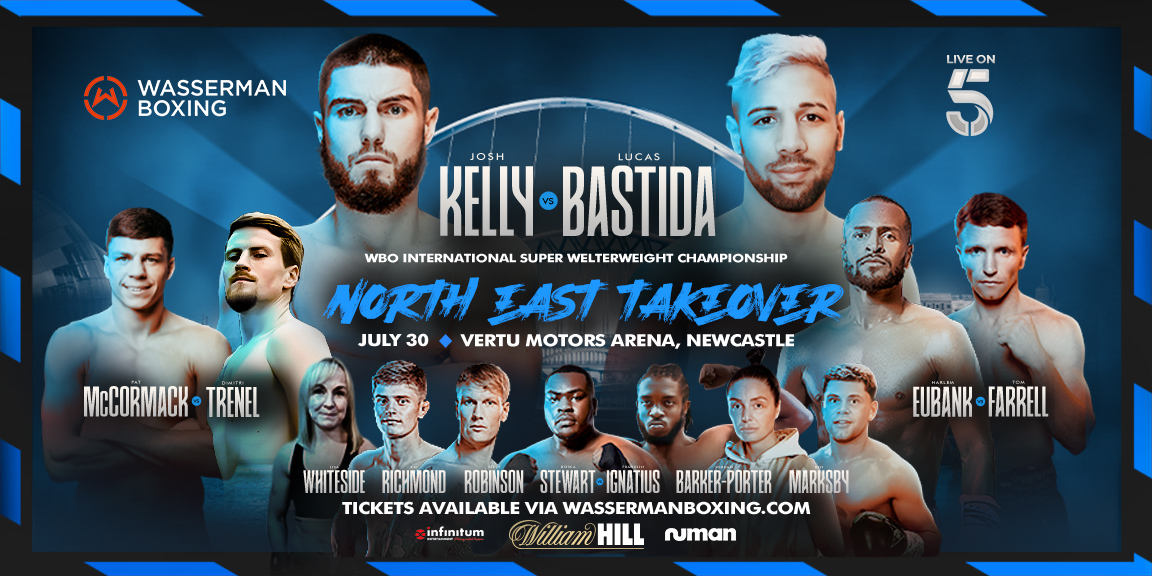 In a huge night of professional boxing, the North East’s very own Josh Kelly will headline at the Vertu Motors Arena on Saturday 30 July.

The home of Newcastle Eagles, the most successful British basketball team of all-time, is set to be the venue for even more sporting successes as some of the region’s brightest boxing stars take to the ring as the arena is transformed for the Wasserman Boxing Fight Night later this month and seen live on Channel 5.

Over 3,000 will take their seats at the Scotswood Road multi-purpose events and sports venue as the largest crowd ever hosted at the arena, which has seen record numbers of sold-out domestic and international basketball games over the last 12-months.

Josh Kelly leads a star-studded line up as he continues his World Title pursuit with a mouth-watering clash against top Argentinian contender Lucas Bastida for the WBO International Super Welterweight Championship as part of a huge night of action.

Kelly returns to the ring following an impressive stoppage victory over Peter Kramer last month in Liverpool, watched by over 1 million viewers on Channel 5.

GB vs Serbia in Newcastle Next Month
September 29, 2022

The Sunderland boxer, who represented Team GB at the 2016 Rio Olympics and has previously held Commonwealth and WBA International Welterweight Titles, can expect one of his toughest career tests when he takes on ‘El Tornado’, the current South American Middleweight Champion, who will be coming to spoil the party and catapult himself into World Title contention.

“He is a tough South American who has plenty of experience for a fighter who is 25 years old. To only have one loss on his record shows how tough he is, there’s no doubt he’ll be coming to win,” said Kelly.

“He’s someone who is going to give me the hard rounds I need to get back into the mix for big fights and major titles.

“I saw in his fight against Avanesyan that he got knocked down, and then he got stopped, so I think the key to victory will be to go to war from the beginning of the fight.”

One of the North East’s most exciting boxing prospects, McCormack has an unbelievable pedigree from his time in the amateurs.

Alongside his Olympic Silver medal, he has claimed European and Commonwealth Gold and World Silver medals.

Now, looking to prove himself in the paid ranks, the 27-year-old cannot wait to showcase his skills and add another win to his record.

Also on the card is Harlem Eubank who will be looking to establish himself as the latest star name from his famous boxing family.

Fans can also look forward to a battle of the undefeated Heavyweights as undefeated prospects Hosea Stewart and Franklin Ignatius square off, plus an array of local fighters ready to prove the North East as a hotbed for boxing talent.

Straight out of Rocky IV, Heavyweight ‘Drago’ Steve Robinson will be hunting for another blockbuster finish when the 6’7” giant from Newcastle looks to provide a finish worthy of his nickname.

The stage is set for Newcastle’s Jordan Barker-Porter  to make it three-straight wins as the 28-year-old Lightweight returns to action in her home city. 2018 Commonwealth Games Gold medallist Lisa Whiteside will look to emulate her previous performance by producing another stoppage win in her Flyweight bout.

Darlington’s Ben Marksby can continue his undefeated streak at Super Lightweight as he fights for the first time in the North East, while future prospect Kai Richmond will aim to pick up where he left off after a comprehensive professional debut for the 22-year-old from Spennymoor earlier this year.

Promoter Kalle Sauerland says he is delighted to be heading to Newcastle to stage another massive night boxing, showcasing local stars and re-establishing the city’s position on Britain’s boxing map.

“Newcastle is known for its party atmosphere, and we are immensely excited to provide the entertainment for a crowd who love their boxing on July 30 at the Vertu Motors Arena,” said Sauerland.

“They’re passionate about their own, and that’ll be no different when ‘PBK’ Josh Kelly comes back to the North East to make another huge statement on a free-to-air show, live on Channel 5.