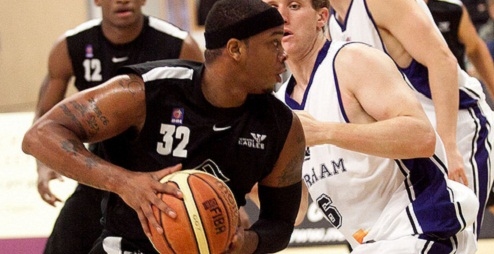 Three players clinch their first spot in the starting five this season including one surprise name.

The Newcastle Eagles’ shooting ace was on top of his game against Durham Wildcats. ‘Mighty’ Joe Chapman produced a mesmerising display of perimeter shooting during a sensational second quarter when almost everything he threw up dropped, even when taken from way deep or with defensive hands in his face. He managed to convert an eye-popping eight triples in the game to finish with 30 points, but it wasn’t just his deadly accuracy from outside which caught the eye. Chapman also managed to dish seven assists as the defending champions left Wildcats trailing in their wake during a one-sided derby game.

Normally confined to limited minutes off the bench, head coach Paul James handed Brummie born guard Daniel Belgrave a big opportunity to shine last weekend and he grabbed it with both hands to find his way into our starting five. Whilst not a particularly well-known face around the league, the Brit has certainly done a great job in trying to change this with an outstanding shooting performance in his teams’ crushing win at Cheshire Jets. Belgrave had the hot hand from downtown, dropping five triples from just six attempts to post a career high top flight score of 26 points. He missed just one shot all night and completed an excellent night of work by pulling down six rebounds for good measure.

It’s a second appearance of the season in our fabulous five for Wolves small forward Alex Owumi who showed he can do more than merely shoot the ball. He was in excellent form as Wolves battered Mersey Tigers to pick up the first of an impressive weekend win double to move to three wins and three losses. Owumi finished with 19 points, but also managed to harvest a super six assists and four rebounds to showcase his all-round game. Owumi also featured in the BBL Team Of The Week during week 2 and is one of only four BBL players so far who have managed to secure more than one appearance.

The Heat have enjoyed a great start to the new campaign and much of that has been down to fans’ favourite Martelle McLemore. Brought back to the club and hoping to ensure a much better season than last year when a slow start weighed the team down, the forward and his team have been in great form with four wins from five games. McLemore was largely responsible for this latest success with an efficient 25 points against One Health Sharks Sheffield at Surrey Sports Park. He also registered seven rebounds, two assists, a steal and a block in an all-action display.

Not only has John Fraley managed to land a second spot of the season in the BBL Team Of The Week, he is also leading the early race for MVP with the best efficiency and production rating of anyone else in the league right now. Having made our starting five back during week 1, the Riders’ frontcourt star is back. He posted the best performance of the weekend with a wonderful performance for his team in their win against London Lions by securing a stellar double-double of 23 points and 14 rebounds. It was achieved via an excellent 11 of 14 shooting display and he also came up with two monster blocks to show he is a defensive force too.