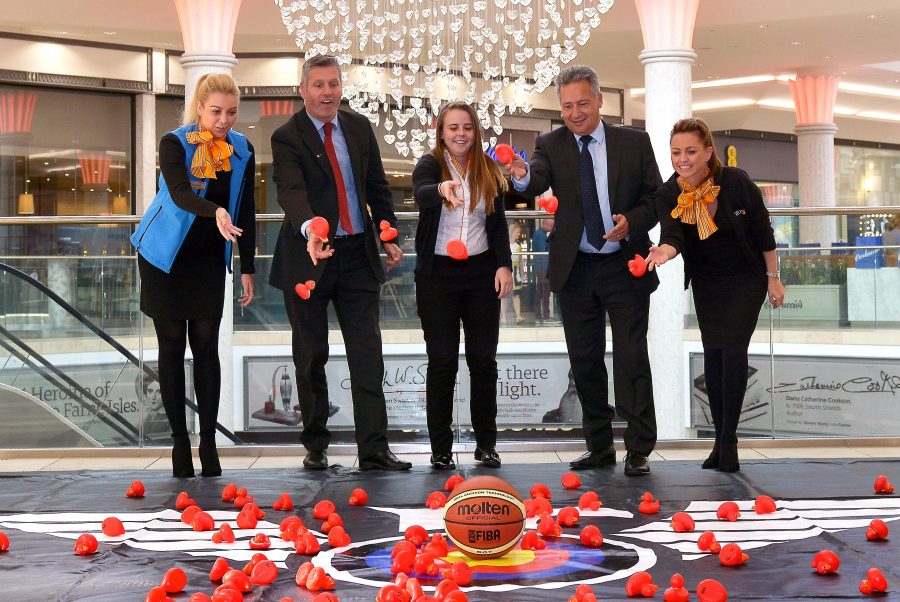 intu Metrocentre and intu Eldon Square have been announced as our latest sponsors for the 2016-17 season, ahead of our opening home game against the Manchester Giants on Friday 30th September.

In addition to sponsoring court-side advertising boards, intu Metrocentre and intu Eldon Square are providing the prizes for our famous ‘Chuck A Duck’ game so every home game fans can pay £1 to throw a duck at a target on the court with the three lucky fans who get their ducks closest to the centre of the target winning an intu Gift Card worth up to £20.

Over the course of the season we will be bringing all the fun of a game-night to intu Metrocentre and intu Eldon Square – from hoop shoot out competitions and coaching, to opportunities to meet our players. Budding young basketball players will be treated to a free lesson on hoop skills in centre by the professionals – an opportunity not to be missed by any fans of the game! Our cheerleaders the ‘Eaglettes’ will also be on hand to bring the game night experience to intu shoppers and exhibition games will take place in centre with teams from the School of Excellence, CVL and others taking part as well as the Percy Hedley Eagles Wheelchair Basketball team.

As an extra treat for fans later this year they will also get to see intu Metrocentre’s cuddly Metrognomes making a special appearance at the game on Friday 16 December.

Gavin Prior, general manager of intu Metrocentre, commented: “We’re delighted to support the Eagles – their outreach programmes have such a positive impact on young people in the region and it’s great to be involved with an organisation who shares so many of intu’s core values. I know that a number of staff have expressed interest in volunteering with the Eagles’ community events as they recognise the important role that they play in the local area.”

Phil Steele, general manager of intu Eldon Square, added: “We’re very proud to be sponsoring the Eagles – the games always have a fantastic family friendly atmosphere and we’re looking forward to welcoming them in centre to give young shoppers a crash course in hoop skills. We also wish the Eagles the very best of luck for another successful season!”

“Having the team at intu support us this season is huge for both the club and our foundation. We’re really excited about the opportunity to bring a little of our game night experience into the centres and let the shoppers see how much fun this sport of ours can be.

“The work the Eagles and intu will be able to do together, as we continue the growth of our foundation’s programmes across the region, is another big win for the North East basketball community. We’re excited to tip-off with the events at intu Eldon Square and intu Metrocentre over the next 12 months and beyond.”