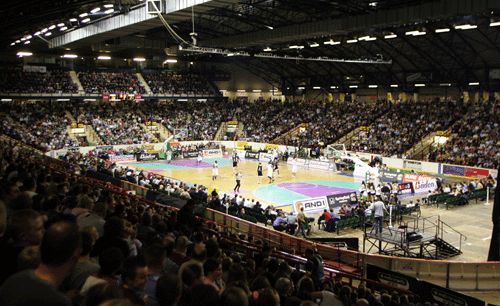 The Eagles have already collected the regular season title to go with the BBL Cup and BBL Trophy, and despite some late season injuries seeing them lose their final four games, they finished the league campaign with a 23-7 record. In contrast, Heat lost their first seven Championship games and suffered 12 straight losses in all competitions but bounced back to seal a place in the play-offs, and finished with a 12-18 record – two wins clear of Prestige Homes MK Lions and Mersey Tigers

The teams meet at Surrey Sports Park in the second leg on Sunday afternoon with the winner on aggregate going through to the semi-finals, which are also staged over two legs.

It will be the second time in six days that the teams have met as a depleted Eagles side went down 100-74 in Guildford last Sunday to break a run of nine straight losses against Newcastle for the Surrey side. However, Eagles had already sealed the head-to-head series between the teams with an 85-64 home win in October and an 83-73 road success just before Christmas.

Despite that good record against the Heat, Eagles’ player-coach Fab Flournoy (pictured) expects a tough pair of games this weekend: “Heat are an athletic deep team who have turned their season around after Christmas with the additions of Drew Lasker and Frank Holmes

“They are a team who shares the ball well and it’s tough to focus on any one player. Our games this season will really have little relevance. We played them first game of the season when they were a different team and then just before Christmas when they were struggling with fitting in new players. Last week will have no influence on the play-offs either.”

Flournoy is unconcerned with his side going into the play-offs on a four game losing steak – the worst run in his ten year stint as player-coach: “The losing streak is irrelevant, what is important is that we have the right mindset going into what will hopefully be a further five games. I am actually very happy with the way our personnel have played over the course of the last three games.

“I was really satisfied with the way we played against both Riders and Jets. Both those teams are extremely solid and the fact that the line-ups we had kept their starters on the floor for the whole game encouraged me. Jack Thompson and Siman Stewart showed commendable maturity and Jack Wilson was (for an 18 year old) very impressive with the poise he demonstrated.

“Also Joel Madourie showed what we always knew, that he could score in this league, by averaging over 20ppg in the three games. Joel understands that he has a number of areas to his game to improve in but he has progressed significantly over the course of the season and I am sure there is more to come.”

The Eagles play-caller expects his injured stars to return for this weekend’s play-off games, and is unconcerned about facing a trip to Surrey for the second leg: “We hope to be full strength this weekend and we have also benefited from getting Joel and Lamar [Morrison] some minutes and good quality competition over the past week so we know that when called upon they will be ready.

“I really don’t worry about the home and away situation. We have to play 80 minutes in total so we just get on with it whether we are home first or away first.”

Heat play-caller Creon Raftopoulos knows the importance of a good result for his side at Sport Central: “In a two leg match up its important you play the first leg right up to the last possession of the game. The other factor you have to adjust to is the referees change from the first leg to the second leg so your style of play can also be changed by the way the referee’s call the game.”

Heat captain Mike Martin knows what to expect from the Eagles on Friday: “It’s the usual suspects really. Charles Smith is always a threat and Darius [Defoe] is playing really well. Paul Gause has given us a lot of trouble, and they all play very good team basketball at both ends of the floor which is why they are where they are.”