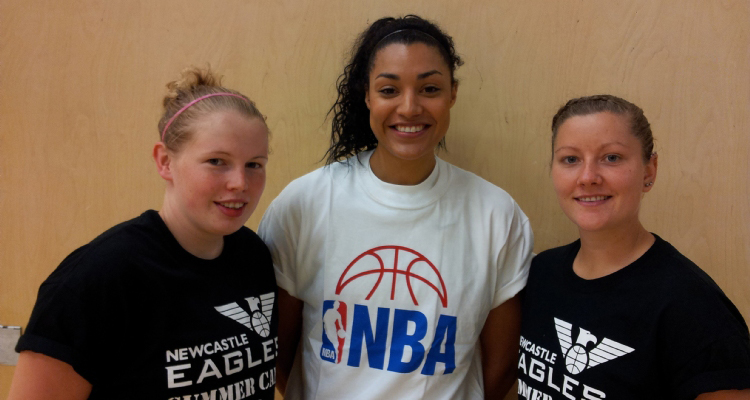 Hot off playing at the 2013 Women’s European Championships Dominique Allen has returned to Northumbria University to coach at the Newcastle Eagles Summer Basketball Camp.

Allen is joined by former Team Northumbria teammates Rachael Bland and Ruth Davison as all three are coaching on the week long camp. Dominique played for Team Northumbria Women National League teams from 2006 – 8 under Coach Deirdre Hayes before heading to Division 1 Oral Robert’s University in the United States. At Oral Robert’s she played in more than 100 games for the Golden Eagles. Allen has represented England for 2 years at Under 18 before she stepped up to Great Britain’s Under 20 team.

Most recently Dominique was part of the Great Britain Olympic team in London. After the Olympics Allen received her first professional contract and headed to Italy where she played for Mecannica Nova Bologna averaging11 points and 8 rebounds per game.

With a change of coach for the Senior GB Women’s team Dominique impressed new coach Damian Jennings and earned her spot on the team which competed at the 2013 European Championships in France. The team recorded 3 wins and 3 losses with Allen averaging 4 points and 4 rebounds per game during the campaign. Allen is known for her great defence; hustle and working hard off the ball for her team mates.

“It is a real honour for Dominique to return to Newcastle and be part of the Newcastle Eagles Summer Basketball Camp. Her hard work on the court has lead to her achievements, hopefully the players on the camp can take away with them by seeing what she has achieved that through hard work and dedication they can reach their goals like Dominique has” – Camp Director Ian Macleod

“Dominique is a real inspiration to the girls on this camp as well as the boys. What they all need to understand is that in 2006 Dom was in the same place as these players currently are in attending this camp and working with Eagles head Coach Fabulous Flournoy that experienced helped her achieve where she is now. They need to see the commitment that she has made” Team Northumbria Women’s Head Coach Josh Merrington.

“It is wonderful to be back in Newcastle. I have been lucky in where basketball has taken me and to share my experience with the players on the camp is a real honour. I hope that years from now the players on the camp have reached their basketball dreams like I have. My time in Newcastle and the experiences I had here were amazing and one of the crucial steps that have led me to where I am today.” – Dominique Allen.