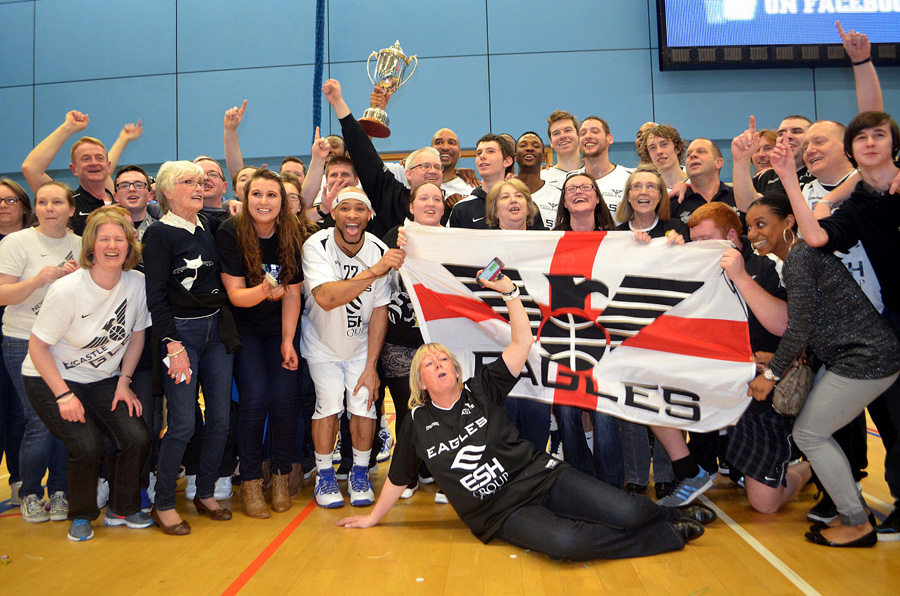 It’s the last weekend of the regular season and with the title having already in the cabinet, Eagle eyes are focused on the play-off race. The eighth spot in the Play-Off race is still unclear, however by the end of the weekdn the Eagles will know who they will face next Friday night in the first leg of the Play-Off Quarter finals.

Four teams are slugging it out to finish in the top eight and bidding to take one of the last couple of play-off tickets still on offer. And, the quartet are all wrapping up their respective regular season schedule with two games.

Plymouth University Raiders and Manchester Giants jointly occupy the seventh position, with both sides slated to face One Health Sharks Sheffield and London Lions in the next three days. This of course means both opponents are likely to have a big say in who makes it to the post-season.

The Sharks racked up a nice win at Wolves midweek and they host Giants tonight at the EIS, before making the trip to Devon on Sunday. Manchester have London Lions at home on Sunday, with Raiders hitting the road and heading to the Copper Box Arena this evening.

Any fears that Lions might be tempted to ease off the gas were allayed by Kramer Knutson, with the centre stating, “This weekend will be big for us in the context of our subsequent play-off challenge.

“We want to be putting it all together and applying the finishing touches to really get all on the same page which can set us up strongly for the play-offs.

“Going up to Manchester will be good preparation after the game on Friday – in terms of having to turn around and then play again on Sunday.

“If we can focus on our defence and rebounding, it will make everything easier for us.”

Sharks’ forward Patrick Horstmann (pictured) meanwhile is expecting a stiff test against Giants tonight, even though Sharks are still flying after taking down Worcester.

He insisted, “Manchester have some good players and we expect them to come to Sheffield desperate to win, which I am sure will make them a tough team to beat.”

Glasgow Rocks have the tricky task of also having to get a victory at the University of Worcester Arena. While they could use their BBL Trophy final defeat as an added motivation for beating the Wolves on the road tonight as they try to jump into the play-offs, Worcester losing to Sharks probably hasn’t helped their cause.

Sterling Davis and his team will then host Surrey United on Sunday, hoping that if they do beat the strugglers, it isn’t too little, too late. Incidentally, Surrey also play Worcester Wolves tomorrow on their home-floor.

Durham Wildcats sit level with the Rocks in the standings and they are looking to make history by taking a first ever play-off place.

They have already collected the most top-flight wins in club history and now they must overcome Birmingham Knights tomorrow before entertaining Cheshire Phoenix on Sunday with a play-off spot still on the line.

Knights of course look set to possibly end the season without a win, something which will be difficult to accept for everyone and not least their star player Brent Benson.

“We want to give the city and our fans in Birmingham something to look forward to going into next year and it would be great to end the season with a win, he said.

“But, Durham will be a tough game.”

And, just when you think head coach Paul Douglas might be glad the season is coming to an end, he is actually frustrated since his side are just beginning to discover their true potential.

He explained, “The performance against Plymouth on the road was really the catalyst for our good display against Newcastle and it was very pleasing to see the players continue that form.

“Also the first-half performance against Cheshire was some of the best basketball we have played all season – especially with Brent out of action due to the injury he picked up against Eagles.

“It has taken far too long for us to realise that if we stick to a game plan and keep our composure, we can compete with the top teams.

“I feel that the scoreline against Eagles does not reflect how close the game was.

“But all credit to Newcastle, they showed why they are the best team in the BBL over the season and we congratulate them on winning the BBL Championship.”